‘It’s only when there’s trouble that boxing gets attention’

In Crumlin Boxing Club, Phil Sutcliffe has been coaching medal winners for many years 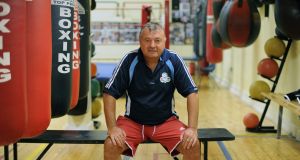 Phil Sutcliffe at Crumlin Boxing club: “A coach is not going to ask a child ‘is your da a gangster?’ when he comes into the club.” Photograph: Aidan Crawley

It is a Thursday fight night like any other at Crumlin Boxing Club in south Dublin. In the entranceway, a couple of young members collect a meagre fee while others run around in anticipation of the evening ahead, swinging at hanging punch bags and pulling on gloves.

In the back office, veteran Phil Sutcliffe is talking to his coaches and thumbing a pile of shiny new gold medals the staff have dipped into their own pockets to buy. Outside, the searing June sunshine and promise of an endless summer can do little to tear the children away. They, like the club itself, are a permanent, immovable fixture.

“Ask them about their values. The value is they come to a place where they feel wanted and they feel respected,” says Sutcliffe, who transformed the club in the early 1990s and has run it ever since. He has lived boxing at every level; he knows the sport and its community and he is happy, if at times perplexed, to consider its recent associations with crime and gangland shootings.

“It’s only when there’s trouble that the boxing seems to get attention and the boxing doesn’t always have trouble,” he says.

“There are shows held all over the country most nights of the week, small hall shows and shows in hotels that do not get the coverage that they deserve, but the minute there is trouble the press are all over us like a rash, which is very, very sad.

“I know bad news travels fast but good news should travel faster to help our sport.”

Sutcliffe is talking about the continued dominance of Irish fighters, particularly younger ones, and the medal hauls that fail to capture headlines. It was a point raised recently by Art O’Brien, national secretary of the Irish Athletic Boxing Association (IABA), who lamented the lack of coverage of the four gold, four silver and six bronze medals captured at the European schoolboy and schoolgirl championships last month.

On Thursday evening, the young children taking part in the traditional inter-club bouts in Crumlin – they have been going for about 25 years – are generally aware that Katie Taylor’s father was shot but less so of the debate consuming, or at least vexing, those involved in the sport.

It began, of course, with the deadly shooting at a boxing weigh-in at the Regency Hotel in 2016. Later there was a shooting outside the National Boxing Stadium in Dublin, the seemingly nervous cancellation of other fights, and the recent death of Bobby Messett and injury of Pete Taylor at his Wicklow gym.

His daughter’s status in the sporting world only helped imbed the issue in the popular imagination. This week she issued a statement saying her name and image had been “misused” in the publicity that followed the violence.

If children who come to box at his club have family involved in crime, he says, then that is peripheral to the boxing.

“A coach is not going to ask a child ‘is your da a gangster?’ when he comes into the club,” he says, always cleaving between the controversy and the benefits his sport offers communities.

“It [the recent events] seems to only grab the public’s interest, or the papers’ interest, which is very annoying when we are producing kids that are winning gold medals, silver medals, bronze medals in schoolboy championships all over the world. And we have been consistently doing that.”

Crumlin has played a major role. The hundreds of photographs adorning the walls around its two boxing rings offer an insight into why the boxing world is loath to take criticism lightly.

The past is captured everywhere – by a framed green jacket from the 1980 Olympics and fading pictures of a young Sutcliffe standing beside Muhammad Ali.

There is the present: Katie Taylor and Conor McGregor, who sparred here in his early days. Its future: the steely eyes of seven-times Irish champion Courtney Daly, who on this particular night is helping out in the club’s shop, one of its few meagre avenues of revenue-raising.

Champions are consistently produced here. In 2015, it took both the best club and coaching awards among 380 around Ireland. And yet, in the small office, Sutcliffe’s wife Michelle is making ham sandwiches for the staff and offering tea or coffee to anyone passing through. It is a humble place at the heart of a working-class area that exists only through a grit-teethed mixture of tradition and self-belief.

In this context, it is perhaps unsurprising that the recent focus on “boxing-related” crime has done little to dent the confidence of those who run it, certainly at amateur level, and will only taint its name, says Sutcliffe, among “small minded people”.

But neither is there any effort to ignore what links to crime there have been. Among the club’s photographs are pictures of old fighters who have been caught up in that world, some of them shot.

Patrick “Bra” Brady (63) has been in the club since he was 11 years old. On the wall is an old black-and-white photograph of him sparring from 1966. He is a breathing history book of Crumlin boxing and has seen the crime in his area.

He reflects that he could have become involved in drugs when he was young but never went down that road. “It’s not worth it,” he says.

Instead, he basks in his chosen environment, giving a proud tour of every corner of the renovated gym. A plumber by trade, he jokes about being owed money for tools by Conor McGregor, a one-time plumbing apprentice himself.

Just as the positives of boxing focus on its children, so too do the negatives, and its involuntary relationship with crime is not casually dismissed.

“You wouldn’t know what is going on but what worries us is if there’s kids in the club,” says Willie Dowdall of the recent shootings. A coach at Glasnevin Boxing Club, he has been in the sport since the mid-1980s and looks nothing like his 49 years.

Dowdall is animated by the sport’s benefits, especially the confidence it instils in children. But he worries about recent social media posts from parents put off by the perceived dangers.

“They all think it’s all to do with boxing; it’s nothing to do [with boxing].”

One of his fellow coaches, Mark McCarthy, has been helping at the well-known St Pappins Boxing Club in Ballymun on the north side of the city for six years.

“It is getting frustrating because the small kids are asking questions now as well,” he says.

“They are getting a little bit scared. They are all speaking about it in the club.”

But, he says, it has not damaged his community’s enthusiasm. Eagerly, he returns to the ring where his daughter Saoirse has been fighting. She has worn gloves since she was three years old and, like so many of her peers, is undeterred by these times.