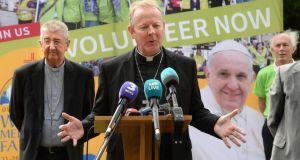 Pope Francis “will be briefed” before he arrives in Dublin about the abuse of women and children in Catholic-run institutions in Ireland, Archbishop of Dublin Diarmuid Martin has said.

“It’s a challenge for all of us in the Irish church to recognise the way people have been damaged, the way the church has been damaged,” Dr Martin said in Maynooth on Monday as he announced details of the pope’s visit to Ireland for the World Meeting of Families (WMoF).

“Certainly he will know when he comes to the Pro Cathedral in Dublin. Many people don’t know that but there’s a candle that has been burning there for years reminding people of the suffering that took place,” he said.

The Catholic primate Archbishop Eamon Martin, who also attended the announcement in Maynooth, described the abuse as “one of the horrific realities of the church in Ireland and indeed of society in Ireland”.

The details of the pope’s visit to Ireland on August 25th and 26th were was “a basic outline, [with] other details at a later stage,” Archbishop Diarmuid Martin said.

When Pope John Paul came to Ireland in 1979 'there were two words not used: ‘health’ and ‘safety’'

Archbishop Eamon Martin said “of course there is disappointment” that Pope Francis will not visit Northern Ireland. “That will have to be a specific visit and I’m hoping that it will occur soon and I’m certainly trying to encourage those in Rome that that might happen.”

He also insisted gay families would be welcomed at WMoF events. “Only two weeks ago I met with a mother whose daughter has just come out and says she is lesbian. That particular mother, her question for me was ‘I love my faith and I love my daughter’. I suppose as a mother church we too love our faith but we also love our people,” he said.

“An opportunity to have a discussion about that particular reality, which is one of the many challenges and struggles that face family life in Ireland today,” was scheduled , he said.

Archbishop Diarmuid Martin repeated his view that costs of the visit would be “about €20 million”. The final national collection to help with its funding takes place in parishes throughout Ireland next weekend.

“The pope himself has said that he doesn’t want extreme expense,” he said. “The Government has been extremely helpful,” he said, and would handle “security for the pope as a distinguished visitor to the country”.

Access to venues which Pope Francis will visit are to be heavily restricted. He will fly by plane from Dublin to Knock airport on Sunday, August 26th and then to Knock Shrine by 9.45am, where he will say the Angelus in the Apparition Chapel. Numbers there will be limited to 45,000.

An hour later, he will return to Dublin for 3pm Mass in the Phoenix Park where crowds will be limited to 600,000 for health and safety reasons.

When Pope John Paul came to Ireland in 1979 “there were two words not used: ‘health’ and ‘safety’,” Archbishop Diarmuid Martin said.

Registrations for WMoF events in Dublin so far indicated the attendance would include a very large number of families bringing their children, he said.

“So you have to look at the safety, the question of accessibility, and the estimate is that in the Phoenix Park a figure of about 600,000 would be looked on today as being safe for that particular venue. Similarly for Knock, the OPW (Office of Public Works) would look at a figure of 45,000,” he said.

The pope will arrive at Dublin Airport at 10.30am on Saturday, August 25th where there will be an official welcome. He will then visit President Michael D Higgins at Áras an Uachtaráin followed by a meeting at Dublin Castle with Taoiseach Leo Varadkar and members of the diplomatic corps.

At 3.30pm, the pope will visit Dublin’s Pro Cathedral before going to the Capuchin Day Centre. That evening he will attend the Festival of Families at Croke Park.

Altogether, he will be in Ireland for 32 hours before departing from Dublin Airport for Rome at 6.45pm on August 26th.