Its laws breach human rights, and its people back change, but politicians remain resistant 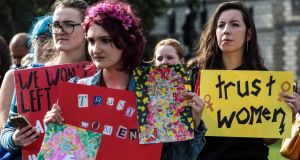 The decisive vote for repeal in the Republic’s referendum on the Eighth Amendment to its Constitution sent a seismic jolt through Northern Ireland, where abortion remains illegal in almost all cases. It has intensified public conversation about the issue, inspiring pro-choice activists to renew their demands for a change in the law.

Last week, in a protest outside Belfast’s High Court, women from the socialist feminist organisation Rosa NI swallowed abortion pills while being filmed by police. The verdict in the South has also caused uncertainty and dismay in anti-abortion campaigners, who fear that, in the words of the slogan, the North is next.

“This really feels like our #MeToo, #UsToo moment,” says Goretti Horgan of Alliance for Choice. “The feeling is that we have sorted the South, now for the North. There is a momentum, and a sense of injustice that the six counties are now the only part of these islands where a woman does not have autonomy over her own body.”

Marion Woods, of Life NI, says that she knew as soon as the result of the referendum came through that the focus would immediately switch to Northern Ireland. “But these are two different jurisdictions, with two different laws covering them. Our feeling is that they can’t be conflated.”

Abortion law in Northern Ireland is dictated by the UK’s 1861 Offences Against the Person Act, which makes it a criminal offence for a woman to cause her own abortion. The 1967 Act, which exempted women in England and Wales from the Victorian-era law, was never extended to Northern Ireland.

In the absence of the Stormont Assembly, there have been calls for a referendum in Northern Ireland. But a plebiscite will not resolve the issue, because, unlike in the Republic, there is no constitutional barrier to the provision of reproductive rights in the North. Even if a referendum were held, it would not be legally binding.

This is why there has been intense focus, particularly in recent days, on both the courts and the House of Commons, as these are the places where the power to make change currently lies.

In the nationalist/Catholic community where I’m based, the [repeal] result has actually turned people off a united Ireland

On Thursday, the Northern Ireland Human Rights Commission lost its challenge against the North’s abortion law at the UK supreme court on technical grounds. For it to be in a position to pass judgment, the court said, the case would have to have been brought by a woman who was pregnant as a result of sexual crime or who was carrying a foetus with a fatal abnormality.

Significantly, however, a majority of the seven-judge panel concluded that the law as it stands is “deeply unsatisfactory” and incompatible with article 8 of the European Convention on Human Rights, insofar as it prohibits abortion in cases of rape, incest and fatal foetal abnormality. This suggests that a challenge brought by a victim of the law could be successful.

One of the women who gave evidence to the supreme court was Sarah Ewart. In 2013 she travelled to England for a termination when she discovered that her baby had no chance of survival outside the womb. Ewart has talked publicly about how the pain of grieving for her baby was exacerbated by having to leave the familiar comforts of home, family and supportive medical staff, an experience she found terrifying. The resulting sense of injustice she felt caused her to campaign with Amnesty International for a change in the law.

Speaking outside the court, Ewart said: “To Theresa May and Westminster, I would say we need change and we need help. Please, please help us.”

Earlier this year a UN expert committee stated that girls and women in Northern Ireland were subject to “grave and systematic violations of their rights” because the UK unduly restricted their access to abortion. Although the Supreme Court ruling is not the full-throated endorsement that the human-rights commission and pro-choice campaigners might have wished for, together with the UN report it increases the already high pressure on Westminster to enact reform in Northern Ireland.

Last June the Labour MP Stella Creasy was instrumental in pushing a new arrangement through the UK parliament that allowed Northern Irish women to have free abortions in England and Wales. This week she led a passionate emergency debate in the House of Commons about the continuing ban in Northern Ireland.

Supported by prominent Tory MPs, Creasy urged parliament to repeal the two sections of the Offences Against the Person Act that criminalise “procuring the miscarriage of any woman”. She called for ministers to implement change within 150 days.

The British prime minister, Theresa May, no doubt mindful that the vehemently anti-abortion DUP is crucial to propping up her government, has already insisted that the question is a matter for Northern Ireland’s own leaders.

Nonetheless, Damian Green, a senior Catholic MP and a close ally of May, has predicted that Westminster will indeed “step in” and liberalise abortion law if devolution is not restored soon.

Highlighting her fear of “disenfranchising 1.8 million people”, Karen Bradley, the Northern Ireland secretary, backed up her boss, saying that although she personally supports abortion reform, it should be the decision of the Assembly.

But Creasy believes that repealing the key sections criminalising abortion would respect devolution, because any decision about new laws would still lie with local leaders.

Creasy told The Irish Times: “This debate showed a very clear will in the house to act. We have waited 150 years for abortion law to change, so we shouldn’t have to wait more than 150 days to have a reasonable draft of legislation and have a free vote on it.”

Why is she acting now? “We can’t ignore it any more. This is less about politics, more about principle. We can no longer leave the women of Northern Ireland behind.”

“I congratulate Stella Creasy,” says Clare Bailey, an MLA with the Green Party in the North. “She is taking us to the heart of the issue. Are we going to send women to jail and prosecute doctors and midwives, or regard abortion as a healthcare issue, regardless of personal beliefs? The call has to be ‘together for Yes’, we’ve got to bring that whole momentum with us and galvanise support throughout Great Britain. In the absence of Stormont, all eyes are on Westminster.”

Ann Furedi, chief executive of the British Pregnancy Advisory Service, the UK’s largest independent abortion provider, says that the current focus on Northern Ireland has opened up the question of decriminalising abortion right across the UK: “I have been working with politicians for 30 years and never, ever in my lifetime has there been the situation where so many MPs of different backgrounds are articulating the case for abortion not being a criminal act.”

Such words are anathema to people such as Tracy Harkin, of the Iona Institute in Northern Ireland. “The pro-choice narrative gets more and more extreme, and it’s been reinforced by the referendum. It’s never enough: there are always calls for more.

“For me, as the mother of a severely disabled child, I’m appalled that across the water they would allow abortions late on in pregnancy. Why would we want to do that here?”

Harkin says that the referendum has had a powerful political impact in the North. “In the nationalist/Catholic community where I’m based, the [repeal] result has actually turned people off a united Ireland. They are saying, ‘We are Northern Ireland. What would we want to go down there for?’ I’m disgusted with Sinn Féin and Mary Lou [McDonald], holding up that poster, ‘The North is next’. I never thought I’d hear it in my wildest dreams, but people are thinking of voting for the DUP because of this.”

This chimes with the DUP leader Arlene Foster’s claim that she has had emails from nationalists and republicans in Northern Ireland “saying they will be voting for the DUP because they believe we are the only party that supports the unborn”.

Fr Patrick McCafferty, the Belfast priest who recently stated that it is impossible to be a Catholic and be in favour of abortion, draws the line at switching allegiance to the DUP. But he does encourage people to examine the policies of individual candidates and vote accordingly.

“We would certainly make alliances with pro-life people, who stand against the evil infringement of the most basic right of all, the right to life.”

For one committed anti-abortion campaigner in the North, who did not want to be named, it is time for a radical overhaul. “The pro-life movement has spectacularly failed,” he said. “What Sammy Wilson said during the debate at Westminster” – the DUP MP spoke of people being “put in a bin before they were ever born” – “was disastrous.

“We need to reflect deeply and come up with a better narrative to explain that we have a serious point to make. We have found ourselves hidebound and constrained by the hard cases. We have to drop this stance of absolutist indignation. It’s time to take away the pictures of aborted foetuses, take away the protests, and offer much greater help to women.”

Whatever the politicians say, the Northern Ireland Life and Times Survey 2016, a comprehensive test of public opinion, shows that the public is in favour of abortion-law reform. “Two things are very relevant,” says Horgan. “Seventy-one per cent of respondents agreed that abortion should be medically regulated, not part of criminal law. And exactly the same proportion didn’t think any women should go to prison for abortion.

“Most people in the North, even if they disagree with abortion themselves, do think that it is up to the woman. If they say that it’s not for them personally, well, that’s fair enough. That’s what we saw happening in the South. And that’s what being pro-choice means – you can be as anti-abortion as you like.”