‘It was extremely difficult to decide to have abortion,’ says Belfast woman in legal challenge 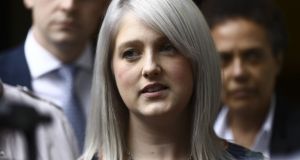 Sarah Ewart, who travelled to England for a termination after she was told her baby’s brain and skull had not developed properly. Photograph: Simon Dawson/Getty Images

Belfast woman Sarah Ewart (28) was told during her 19-week scan in October 2013 that her baby’s brain and skull had not developed properly and the child would not survive.

Ms Ewart travelled to London for a termination at her own expense, with flights and hotels included, coming to a cost of more than £2,100.

Ms Ewart spoke publicly at the time about her abortion on BBC Radio Ulster’s Stephen Nolan programme and ever since been campaigning alongside Amnesty International for a change in Northern Ireland’s abortion laws.

In November 2015, Ms Ewart joined the judicial review taken by the Northern Ireland Human Rights Commission (NIHRC) which resulted in Belfast’s High Court ruling that the North’s abortion law was incompatible with human rights law in the case of pregnancies resulting from rape or incest, or where there were fatal foetal abnormalities.

In an article written by Ms Ewart in The Irish Times in December 2015, she said “it was extremely difficult for me to decide to have an abortion”.

“We are a family who never had to think about abortion until this happened. Suddenly I was a 23-year-old woman dealing with something I never thought I’d have to.”

Ms Ewart said a change in the law in Northern Ireland is needed “to help women like me”.

“The experience is distressing enough without having to go to England for treatment,” she said.

“We need compassion, respect and dignity.”

Speaking outside the UK supreme court in London after its ruling on Thursday, Ms Ewart said “I have no regrets whatsoever”.

“If this same thing was to happen to me tomorrow, and the law wasn’t changed, I would make the same decision,” she said.

“The highest court in the land has recognised that Northern Ireland is in breach of human rights for people who find themselves with fatal foetal abnormality.

“They have said that the law needs to be changed, so we will keep going until we get that change.”