Not meaning to crib but . . . timing of most nativity scenes is off

The annual IFA Live Animal Crib has opened at the Mansion House in Dublin with Christmas carols being performed by a number of groups including the Little Angels from St Joseph's Nursery, Maryland, Dublin. Video: Bryan O'Brien 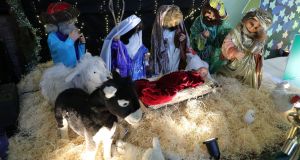 The GPO crib: ‘The wise men (and the Bible never tells us how many of them there were) do not take their place until the Epiphany (January 6th). Photograph: Nick Bradshaw for The Irish Times

Most Christmas nativity scenes currently on view are wrong, with Mary, Joseph, baby Jesus, the shepherds, angels and three kings all appearing way before time, according to a senior cleric’s December letter.

Church of Ireland Bishop of Cashel Michael Burrows has outlined the correct sequencing of arrivals to the Christmas crib.

Up to December 24th it “should be virtually empty although carefully prepared. The animals should be there, with the manger and the hay, but really little else,” he writes.

In the Gospel, according to Bishop Burrows, “on Christmas Eve Mary and Joseph arrive” and “around midnight, the baby Jesus is placed in the manger while perhaps the angels sing above”.

“By morning’s light on Christmas Day the shepherds have arrived . . . but the wise men (and the Bible never tells us how many of them there were) do not take their place until the Epiphany (January 6th).”

The Pro Cathedral crib is the most demure, with Mary and Joseph gazing tenderly at a vacant space to be filled by Jesus

Not so in Dublin ,where, following an examination by The Irish Times on Monday, many cribs were found to be overcrowded by these standards.

An outstanding example is the GPO crib where Mary, Joseph, the baby Jesus, assorted shepherds, kings/wise men and animals vie for room at the inn with a chicken. At the Mansion House, the live crib has a goat, a donkey and two sheep.

The Stephen’s Green Centre crib was probably the most honest. In the empty space between Mary and Joseph, yet to be occupied by baby Jesus, it has Mammon, incarnated in very many glittering coins – none of them gold.

And in the background shepherds and wise men/kings who, with the same unabashed discourtesy, have arrived too early in keeping with kindred in the other cribs.

The Pro Cathedral crib is by far the most demure, with Mary and Joseph gazing tenderly at a vacant space to be filled by Jesus. Waiting patiently with them is an ox and a donkey, an angel and two shepherds. However, if Bishop Burrows is correct (and there is no reason to believe otherwise), none of them should yet be there.

Most surprising, however, is his revelation that “the crib should probably remain in place until 40 days after Christmas (February 2nd)”. That is until Candlemas, “the Feast of the Presentation of Christ in the Temple, the last event in the birth story of the Lord”.

1 All students will not return to school even if social distancing rules are relaxed – McHugh
2 Dangerous student stalker sentenced to seven years in jail
3 Miriam Lord: Taoiseach is trapped in a Zoom session from hell
4 The human cost of Covid-19: Ireland's care homes with the most deaths revealed
5 Emily Maitlis thanks BBC viewers for support after Cummings row
Real news has value SUBSCRIBE