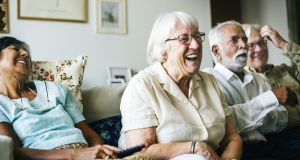 The UN recognised ageing population growth as one of the most distinctive demographic events of the 20th century and it will remain a priority throughout the 21st century. Photograph: iStock

With people living for longer – the Central Statistics expects there will be about 1.6 million over 65s by then – the State has had to adapt, with McGuigan pointing out that “although people are living longer they are not necessarily healthier”.

The UN recognised ageing population growth as one of the most distinctive demographic events of the 20th century and it will remain a priority throughout the 21st century, effecting virtually every country on the planet. The inevitable consequences of people living longer include higher pension costs, additional healthcare requirements and providing a quality of life for retired people.

The Department of Health published its National Positive Ageing Strategy in 2013 in an attempt to respond.

It set out a vision for a more age-friendly society under the headings of participation, health, security and research. It recognised that all sectors of society – government, businesses, voluntary groups, service providers and the general public – played a role in creating an age-friendly society.

It also identified the need for local structures to complement those at national level as so many of the factors that contribute to a good quality of life for older people are community-based.

Ireland was the first country in the world to be fully affiliated with the World Health Organisation’s Global Network of Age Friendly Cities and Communities.

Age Friendly Ireland was set up in 2014 to co-ordinate on this front, providing guidance to the State’s 31 local authorities and relevant agencies on how best to proceed.

“This was all done without any new money, from within existing budgets,” says Ms McGuigan, adding that help came from city and county mayors and agencies such as the Health Service Executive and Garda.

Each local authority now has an age-friendly strategy and has committed to ensuring they are more inclusive and supportive of people as they age, with the aim of making Ireland a great place in which to grow old.

There is an “older people’s council” in each participating local authority area, allowing older people some influence on age-friendly local developments.

An event taking place at Slane Castle in Co Meath on Monday “celebrates 10 years of Age Friendly Ireland good practice” and the fact that Ireland is the first country in the world to receive recognition from the WHO for hitting associated targets across all administrative areas of the initiative, Ms McGuigan says.

“Just three US states have met the criteria for such recognition . . . A lot of countries are coming to us for advice.”