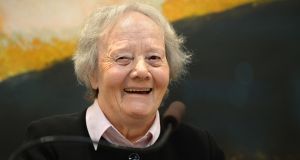 The State’s homelessness crisis has opened up a “cesspool” for those at the centre of it and is contributing to the growing problem of drug addiction, the founder of the Cuan Mhuire addiction treatment and rehabilitation service said.

Speaking at Leinster House on Thursday after being presented with the Oireachtas Human Dignity Award, Sr Consilio Fitzgerald expressed concern for the 3,826 children among the more than 10,500 people living in emergency accommodation in the State.

Sr Consilio noted that people at every level of society were struggling with addiction and noted reports stating that cocaine use had returned to levels seen during the boom years.

“In the past, we never had waiting lists for our centres. Now, we have a huge waiting list of about 200 people. Nowadays there’s more demand, more need, more difficulties. It’s not just cities or towns anymore – drug addiction is all over this country. It’s frightening,” she said.

Sr Consilio expressed concern that the rising number of homeless people was contributing to the rise in drug usage across rural Ireland as the emotional distress can make people feel like “less of a person” and lead them to drugs to “give them a boost”.

She commended the efforts of Fr Peter McVerry in his work to reduce homelessness and the harm caused by drug use in Dublin. “Only for him, an awful lot more people would be in distress.”

Moved by the plight of the “men of the road’ she encountered in her work as a nurse, Sr Consilio began Cuan Mhuire in a room in the Convent of Mercy in Athy, Co Kildare, in 1966. It now has five treatment centres and seven transition facilities across the State.

The award was presented by Leas Ceann Comhairle Pat The Cope Gallagher, who said: “It is my great pleasure to present the award to Sr Consilio Fitzgerald. She has dedicated her life to helping others through their most difficult times.”

Senator Rónán Mullen, of the Oireachtas Human Dignity Group, said Irish society was “at risk as never before” from the impact of addiction and that Sr Consilio’s work shows the “solution begins with respecting and believing in the individual person”.