Ireland urged to take up action plan to combat racism 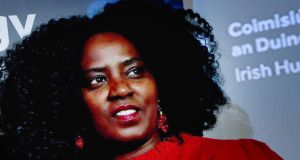 Irish Human Rights and Equality Commission member Salome Mbugua: “We need as a society to ensure that in our communities and country, racism has no safe harbour, no resting place.” Photograph: Maxwell’s

The UN has called for Ireland to adopt a new national action plan against racism and to phase out direct provision as part of a series of recommendations to end racial discrimination.

The concluding observations from the UN committee on the elimination of racial violence were published on Friday following Ireland’s appearance in Geneva last week.

The committee expressed concern about “gaps” in existing anti-racial discrimination, particularly the State’s failure to renew its national action plan against racism since 2008 and the disbandment of the National Consultative Committee on Racism and Interculturalism.

The 2017 Migrant Integration Strategy was “not comprehensive enough” and a new plan against racism should be introduced, it said.

It called for the Online Safety and Media Regulation Bill to be enacted “expeditiously” and said acts of hate speech committed by politicians should be effectively investigated and prosecuted.

The committee warned of a “high incidence of racial profiling by gardaí” and called for legislation to prohibit the practice and an independent complaints mechanism to handle such issues.

The judicial council, gardaí, prosecutors and judges should also receive training on the proper methods for identifying, investigating and prosecuting racist hate crime, while legislative provisions should be made for crimes with a racist motivation, it said.

The committee recommended that Travellers, Roma and people of African descent receive improved access to social housing, and called for a moratorium on evictions of Traveller accommodations. The national Traveller and Roma inclusion strategy should also be fully implemented through concrete action plans, clear targets and time frames, it said.

On direct provision, the committee called for “concrete steps to phase out” the system and the introduction of an alternative reception model. In the interim, the reliance on emergency accommodation must end, it said.

It called for decisions on asylum applications to be made within six months, the introduction of vulnerability assessments and a reduction in the nine-month wait period for a work permit.

Migrant women who are victims of sexual violence should be guaranteed a legal stay regardless of their residence status until they have recovered, while victims of trafficking should have access to shelters and legal protection, it said.

The committee also recommended the scope of the Legal Aid Board be extended to support Travellers and other ethnic minority groups.

It said the commission of investigation into mother-and-baby homes should be carried out in a “thorough, effective and timely” manner and that its recommendations be fully implemented.

Recommendations also included a significant review and renewal of Ireland’s equality legislation and the State’s incorporation of the Convention on the Elimination of Racial Discrimination (Cerd) into domestic law. Ireland should also stop purchasing coal from Colombia’s Cerejon mine, it said.

The Irish Human Rights and Equality Commission, which submitted a report on racial discrimination to the UN hearing in October, welcomed the committee’s focus on tackling racism across housing, education, healthcare and the labour market.

“We need as a society to ensure that in our communities and country, racism has no safe harbour, no resting place,” said commission member Salome Mbugua. The commission said it would continue to monitor the State’s progress on the UN recommendations.