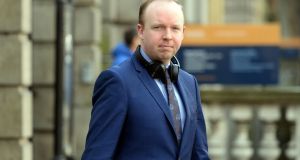 The rising number of people recorded as living in emergency accommodation in the latest official figures is “particularly remarkable” as it comes at a time of year when homelessness usually decreases, a Fine Gael TD has said.

Speaking as housing charity Threshold published its 2018 annual report on Wednesday, Oireachtas housing committee chairman Noel Rock said the Department of Housing statistics, which showed 10,514 people were without a home in October, were a cause for concern.

“It’s particularly remarkable given it’s at a time of the year the numbers normally go downwards, traditionally and seasonally, and are actually going upwards this year,” he said. “That’s a concern and a challenge and it’s something worth noting, something we shouldn’t ignore and something we need to work on.”

The figures show the number of people living in emergency accommodation increased by 117 in October. There were 6,688 homeless adults (4,534 in Dublin), an 11.5 per cent since the same month last year. The number of children in emergency accommodation fell by 47 after a record high figure in Septemer, but a total of 3,826 children remain without a home.

Threshold says the problem of homelessness could be “twice as serious” were it not for its prevention services, which it says helped some 11,000 people to remain in their homes last year.

Its report says the charity it answered an average of 321 calls every day from tenants in need of support last year and carried out more than 67,000 actions on their behalf such as making calls, providing legal representation and helping them to navigate “the complex laws underpinning tenants’ rights”.

“Because of this work, we stopped 5,161 households from becoming homeless. That’s 4,451 children and 7,111 adults who would have lost their homes without Threshold’s support,” the charity’s chief executive John-Mark McCafferty said.

“There are also many hidden homeless people who are couch surfing, staying with family and friends, and living in very overcrowded conditions. These people are not showing up in homelessness figures, but they are facing a housing crisis and need solutions.”

Mr Rock said said the Government was examining proposals to clarify tenancy protection surrounding receiverships and to provide for tenancies of indefinite duration, “both of which would be most welcome”.

“Of the notices of termination we dealt with, we found that over half of them were invalid and we helped clients challenge them,” Mr McCafferty added

Threshold represented 254 clients at the Residential Tenancies Board last year, almost three times as many as in 2017.