Travellers forced to hide identity to get jobs, committee hears

Groups call for measures to tackle community unemployment such as quotas, internships 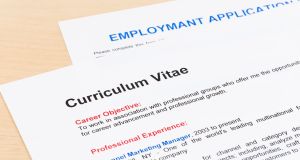 In one case, two young Traveller men applied for a job with a local pharmaceutical company using their Traveller name and heard nothing back. After they removed their Traveller identification from their CVs, the two men were both subsequently interviewed and hired by the company. Photograph: iStock

Members of the Traveller community are having to hide or lie about their identity in order to attain employment, a committee heard on Tuesday.

The most recent figures from the 2016 Census show that 80 per cent of Travellers were unemployed.

Speaking at the Joint Oireachtas Committee meeting on issues affecting the Travelling community, Traveller organisations and representative groups said discrimination and bias are two of the biggest issues they face when seeking employment.

According to the National Traveller Survey 2017, 43 per cent of Travellers experienced discrimination when accessing employment and only one in 10 non-Travellers said they would employ a Traveller.

James O’Leary, director of Involve, a youth service, said he is aware of a case in which two young Traveller men applied for a job with a local pharmaceutical company using their Traveller name and heard nothing back.

After a few weeks, their university lecturer advised them to reapply using their Irish names. The two men were both subsequently interviewed and hired by the company once they removed their Traveller identification from their CVs.

‘Keep an eye out’

Patrick Riley, from Pavee Point, said he was aware of another incident in which Traveller men were working as bouncers, had not informed their boss that they were from the Travelling community, and were told to “keep an eye out” for Travellers or Romas.

Kathleen Sherlock from Minceirs Whiden said that the community faces “unemployment on a mass scale”.

She attributed this unemployment to a lack of opportunities available to Travellers, adding that Traveller children often leave school with “very little education”.

“Doors to employment are closed because of their identity. They have to hide their identity,” she said. “Anti-traveller racism continues to go unchecked in the workplace.Travellers have been completely left out of the labour market.”

Ms Sherlock added that this attitude is resulting in Travellers being “corralled down dead ends”.

She said the situation is resulting in Travellers who are “overly dependent on the State, at high risk of addiction, high risk of suicide because they can’t cope or, in some cases, they turn to anti-social behaviour or criminality”.

“We blame people for their destination without looking at all the contributing factors,” she added.

TJ Hogan, also from Minceirs Whiden, said that there is an untrue myth that Travellers do not want to enter the workforce.

“Many are trying very hard to get employment without success . . . because of anti-Traveller bias,” he said.

He added that many Travellers just want the “ability to be able to contribute, ability to provide for themselves and also their families”.

The representative groups called for a number of measures in a bid to tackle unemployment in the community such as targets, quotas or Traveller-specific internships and apprenticeships.

The groups also highlighted a need for employers to appreciate the diversity and cultural differences that Travellers can bring to the workplace.