State is ‘letting children down’ on housing, says Minister 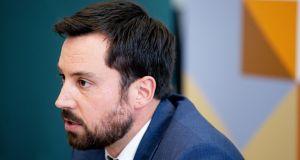 Minister for Housing Eoghan Murphy said ‘there is big hypocrisy in this debate’ as some politicians calling for action also object to housing projects. Photograph: Tom Honan/The Irish Times.

The State is “letting children down” by having them live in emergency accommodation, Minister for Housing Eoghan Murphy has said.

Mr Murphy was updating an Oireachtas housing committee on the progress of Rebuilding Ireland, the Government’s plan for housing and homelessness, published in 2016 and branded an “abject failure” by housing campaigner Fr Peter McVerry.

In the first nine months of the year, 4,389 adults, and their families, moved from homelessness to a home, up 17 per cent the same period in 2018. Of these, 873 moved into a local authority home, an increase of almost 70 per cent on the same period last year, he told the committee.

In Dublin in the first nine months of the year, 786 homeless families moved to a a home an increase of almost 50 per cent on the same period in 2018.

The number of rough sleepers in Dublin was reducing, Mr Murphy said, with the annual winter rough sleeper count, conducted at the end of November, showing the lowest level of rough sleeping since 2015 at 92 individuals.

Senator Colette Kelleher (Ind) asked if Mr Murphy accepted the “very detrimental effects and the adverse childhood experience of living in homelessness” and if he ever thought what affect that might have had on him as a boy.

However, he said it was “untrue” and “unfair” to say nothing was being done.

“Some commentators on homelessness, be they expert or not, would suggest that nothing is being done; that policy is failing completely. But that is untrue and it is unfair to the hundreds of local authority staff and our partners in the NGO sector working on the front lines up and down this country doing their utmost to assist vulnerable households.”

Sinn Féin TD Eoin Ó Broin queried the number of families spending several years in emergency accommodation. He said these were often larger families, including Traveller and Roma families, and he asked was it “not time for very specific interventions” to deal with this issue.

He said Mr Ó Broin was “absolutely right” to point out that many of those enduring longer stays were larger families, but he said they often had “very complex needs” , that required greater interventions than just housing.

Mr Murphy said he would “echo the call” for public representative not to block housing developments and said he himself had never lodged a housing objection.

“There is big hypocrisy in this debate and I encounter it with people every day. They begin a sentence saying they are visibly distressed about emergency accommodation by the end of the sentence they are talking about how they are against the apartments being built,” he said.

“It really bothers me when I see TDs trying to rabble rouse locals around objections, even around judicial reviews. Those same TDs are giving out about us not doing enough around housing.”

In the first nine months of the year almost 4,400 social homes were provided by local authorities and approved housing bodies under “build, acquisition and leasing” programmes and a further 13,600 households were accommodated in private rented accommodation using the Housing Assistance Payment and Rental Accommodation Scheme programmes.

“This is having an impact - the social housing waiting list has reduced by over 25 per cent, or by 22,907 households, compared with the assessment conducted in September 2016,” Mr Murphy said.