Hundreds sleep out in Trinity College as part of homeless campaign

International event being held to raise awareness of issue worldwide 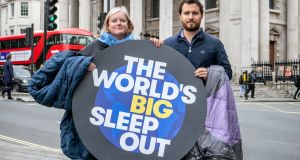 Dame Louise Casey and Josh Littlejohn who have organised the world’s sleep out taking place this weekend. Photograph: The World’s Big Sleep Out

More than 600 people are set to camp out in Dublin’s Trinity College overnight on Saturday as part of the World’s Big Sleep Out taking place around the globe this weekend.

An estimated 60,000 people will sleep on the streets of 50 cities worldwide, including London, New York, Edinburgh, Los Angles, New Delhi, Hong Kong, Brisbane, Manila and Santiago, in solidarity with those facing homelessness internationally.

The World’s Big Sleep Out was spearheaded by Josh Littlejohn who runs a sandwich shop in Edinburgh which employs homeless people. For the last two years Mr Littlejohn has held sleep in the park events in Edinburgh to raise money for homeless charities but this year decided to make the event global.

Holding an outdoor overnight event in the lead up to Christmas, and when temperatures are at their coldest, helps focus people’s minds on the harsh reality faced by so many without a home, said homelessness expert Dame Louise Casey who chairs the sleep out board.

“In December people are thinking about eating and drinking and spending time with their families and that does trip our consciousness and makes us ask ‘should we be doing more for people who don’t have those choices?’.

“Most sleep outs happen in June when it’s warmer but we thought it needed to happen now, particularly in northern hemisphere countries like Ireland, the UK and the US. We want people for one night to experience that hardship and show a moment of solidarity.”

The goal is to raise international awareness of homelessness following the UN’s commitment to address the issues of affordable housing and homelessness worldwide as a priority theme for 2020. “We want every country in the world to count the number of homeless people. If you have a number it focuses governments’ minds. At the moment the UN doesn’t ask all its nations to measure this number.”

The latest figures from the Department of Housing show 10,514 people were homeless in October, including 3,286 children. To reduce these numbers, the Government not only needs a comprehensive strategy focused on social housing and regulation of the rental sector, but must also focus on prevention of the problem, sais Ms Casey, who previously led a UK programme in the late 1990s to reduce homelessness which saw the numbers of people living on the streets drop by two thirds.

David Carroll, chief executive of cross-border homeless charity Depaul which is helping to organise the Trinity college event in Dublin, encouraged people from across Ireland to sign up and take part in their own towns and cities.

Saturday’s event begins at 5pm with participants entering Trinity College via the Nassau Street entrance and a concert featuring the Script starting shortly after. Entrance to the university will close at 9pm with the sleepout starting at around 10pm.