Colleges ‘shun any real place for religion in their culture’, Diarmuid Martin says 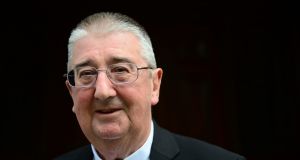 Archbishop of Dublin Diarmuid Martin said there was “a need for the transformation of dimensions of Irish culture for the sake of mature pluralism”. Photograph: Dara Mac Donaill

Irish universities have “lost the dream” which Cardinal John Henry Newman had of “liberal education and of a liberal education for Catholics”, the Archbishop of Dublin, Diarmuid Martin, has said.

Speaking in Rome as preparations were under way for the canonisation of the founder of the Catholic University, the precursor of University College Dublin (UCD), the archbishop said: “Newman wanted to show his contemporaries that faith and reason do not conflict, but also that ‘reason could not be the sole arbiter of all truth’.

“The development of university education in Ireland has lost this dream of Newman. The main universities proclaim themselves to be by definition exclusively secular and thus they shun any real place for religion in their culture. On the other hand, adult faith formation suffers because it is deprived the interdisciplinary nature of a university.”

Dr Martin was speaking at the Irish College in Rome on Friday evening in a lecture sponsored by the institution and Ireland’s Ambassador to the Holy See Derek Hannon.

The archbishop said Irish culture was “becoming impoverished by a false dichotomy between religion and society and both sides of the debate are at fault. We need a new relationship.” There was “a need for the transformation of dimensions of Irish culture for the sake of mature pluralism”.

Newman is being canonised with four other people, all women, on Sunday. The four are Sr Mariam Thresia of India who founded the Sisters of the Holy Family; Italian Sr Giuseppina Vannini, founder of the Daughters of St Camillus; Brazilian Sr Dulce Lopes Pontes of the Congregation of the Missionary Sisters of the Immaculate Conception of the Mother of God; and Marguerite Bays from Switzerland, of the Third Order of St Francis.

Images of each bedecked the front of St Peter’s Basilica on Friday, with Newman in the midst serenely gazing across the square.

Two miracles necessary for Newman’s canonisation were put forward. The first of these was the case of Jack Sullivan, a man studying for the diaconate in Boston, Massachusetts, who was on the verge of complete paralysis in 2001 when he claimed to have been miraculously healed after praying to Newman. A second miracle, approved by the Vatican in November 2018, concerned the healing of a pregnant American woman from a life-threatening condition.

Despite Newman’s international status as a theologian, writer and educational reformer, and his historical links to UCD, the university seemed to have been reluctant to send a representative to Rome. A spokeswoman told The Irish Times last week: “Although John Henry is the founding rector of our antecedent, the Catholic University, we have been a secular university since 1908 and consequently are not invited in a formal capacity.”

On Tuesday, the Government announced that Minister for Education Joe McHugh would represent it at the ceremony, and it was only then that UCD appeared to relent.

“In light of the Government decision to send Minister for Education Joe McHugh to represent the Government at the canonisation of John Henry Newman, UCD will be represented by vice-president Prof Orla Feely, ” UCD said in a statement on Wednesday.

UCD can’t be accused of shying away entirely from its links to Newman. Arts faculties are located in the Newman Building at Belfield. The university website proclaims that UCD president, Australian Prof Andrew Deeks, is “only the second person from outside Ireland to lead the university since its founding rector, John Henry Newman”.

Elsewhere, the site notes: “Founded in 1854, UCD was created from an idea, The Idea of a University, written by our founding rector John Henry Newman. This classic work is one of the most enduring texts on the value of higher education.”

However, it is probable educational institutions in the UK would make greater play of their links with such an elevated figure.

The English will be well represented at the canonisation as Newman is a huge figure in Anglicanism, from which he converted, as well as Roman Catholicism. When it was announced earlier this year that Newman was to be canonised, he was described by the St Martin magazine as “the English saint for the Irish”.

According to the Tablet, “thousands of Catholics from England and Wales” would attend, led by Prince Charles, Cardinal Vincent Nichols, 17 English and Welsh bishops, six Church of England bishops and an envoy from the prime minister’s office.

Also there will be 13 MPs from Westminster’s all-party parliamentary group on the Holy See; representatives of the two Oxford Colleges Newman attended, Oriel and Trinity; as well as Birmingham, where Newman established the first English oratory. It will be represented by lord mayor Cllr Mohammed Azim.

The Irish Catholic Church will be represented by Bishop of Limerick Brendan Leahy, who will lead 30 pilgrims there, and by a number of other bishops.

Newman frequently declared his great affection for both Britain and Ireland, something that has added resonance today not only against the backdrop of Brexit but also the decline of Christian churches.

In his Isles of the North, written in the 1850s when he was in Ireland, he wrote of the two islands: “Distinct, nay antagonistic, in character and talent, the one nation and the other, Irish and English, the one more resembling the Greek, the other the Roman, open from the first perhaps to jealousies as well as rivalries, they consecrated their respective gifts to the Almighty Giver.

“Yet, after all, the Irish,whose brilliancy of genius has sometimes been considered, like the Greek, to augur fickleness and change, have managed to persevere to this day in the science of the saints, long after their ancient rivals have lost the gift of faith.”