Ideology the ‘only obstacle’ to social and affordable housing, say protesters

Fine Gael needs to ‘step back’ from its current policy, protesters outside Dáil told 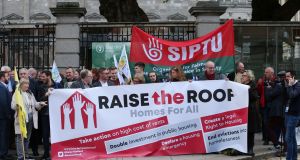 Representatives from political parties, trade unions and civil society groups outside Leinster House under the banner of Raise the Roof to demand that the Government implements a major motion on housing passed by the Dáil a year ago. Photograph: Laura Hutton/The Irish Times

The “only obstacle” to a “massive” programme of social and affordable home-building on public land is Government ideology, a gathering of activists calling for greater action on the housing crisis heard on Wednesday.

The motion, supported by all parties except Fine Gael, called for stronger rent controls, a doubling of investment in public housing, an end to evictions into homelessness, a legal right to housing and the declaration of a housing emergency. It has not been implemented.

Patricia King, general secretary of the Irish Congress of Trade Unions, said since the publication of the Government’s action plan on housing, Rebuilding Ireland in 2016, the situation had deteriorated.

“There’s a cohort of workers on low- to middle-incomes who are not able to make it in terms of acquiring a mortgage and are not able to afford the rent . . . That to me is nothing but a policy failure. Fine Gael needs to step back from the current policy. Their reluctance seems to be due to a very strong ideological bent towards the use of the private sector.”

Dunlin city councillor Tina MacVeigh and member of the National Housing and Homelessness Coalition said the “obvious solution” was that the “Government needs to start building public housing on the very large swathes of publicly-owned land”.

“The only thing blocking the Government at this stage is its ideological position. The broad consensus is that we need a Government-led programme of home building on public land.”

Saoirse Brady, head of legal policy with the Children’s Rights Alliance said the crisis was acutely felt by children in precarious housing. “We need to put children’s best interests at the heart of housing legislation and policy.”

Also on Wednesday, housing charity Focus Ireland delivered a petition of over 10,700 signatures calling on all political parties to commit to end youth homelessness ahead of a general election. A date has not yet been set for an election.

Mike Allen, director of advocacy, said young people had been “left behind” by the housing crisis.

“Young adults are most likely to bunk-in with friends and extended family to keep a roof over their heads. They are part of the hidden homeless and are not included in the Government’s official homelessness figures. This needs to be addressed as a matter of great urgency,” he said.