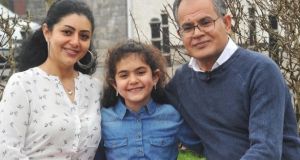 Syrian family Zuhair Fakir, his wife Angham and their daughter Lorca, who were selected for resettlement from Lebanon as part of the State’s pilot community sponsorship programme and now live in Dunshaughlin, Co Meath. Photograph: Seamus Farrelly/UNHCR

Ireland has been named the first ever winner of an international award for promoting community sponsorship as means of providing housing to refugee families.

The State launched a pilot community sponsorship model in December 2018 as an alternative way to resettle refugees in Ireland. Under the programme, towns, villages and parishes across Ireland were encouraged to “sponsor” a vulnerable refugee family.

Since then, five Syrian refugee families (17 people) have been welcomed into communities in Cork, Waterford and Meath. A sixth family came to Ireland in 2018 under a similar programme organised independently by a community group in Wicklow town.

The concept of community sponsorship dates back four decades to Canada where the system was first established. Since then, more than 300,000 refugees have been resettled across the country through the scheme.

The Global Refugee Sponsorship Initiative (GRSI), a joint initiative led by the Canadian government, the UN High Commissioner for Refugees, the Open Society Foundations, the Giustra Foundation and the University of Ottawa, was established in 2016 as a body to promote private community sponsorship across the globe. The initiative has been supported and followed up by governments in Ireland, the UK, Argentina, Spain and New Zealand.

The international award was presented to Eibhlin Byrne, director of the Irish Refugee Protection Programme on Tuesday in London in recognition of Ireland’s contribution in establishing the first phase of community sponsorship and “sharing your enthusiasm and expertise with others”.

Minister of State for Immigration David Stanton commended the communities which had signed up to take part in the project, describing their support for families as “true examples of the values of welcome and friendship that are so central to Irish life”.

Following the success of the pilot scheme, an official Community Sponsorship Ireland national programme is expected to be announced by the Government in the coming weeks.

Ireland’s community sponsorship programme was established as a strand of the Irish Refugee Protection Programme (IRPP) which was set up in 2015 in response to the migration crisis. The Government pledged at the time to welcome up to 4,000 people into the country. A total of 2,555 have arrived her to date under various strands of the programme including 51 unaccompanied minors.