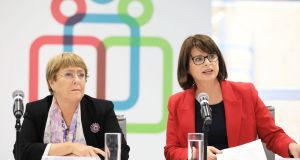 Workplace discrimination against people with disabilities is “persistent, pernicious and prevalent in Ireland,” the head of the Irish Human Rights and Equality Commission (IHREC) has said.

Emily Logan, IHREC chief commissioner, said latest Central Statistics Office figures showed people with disabilities were more than twice as likely to be unemployed than those without a disability.

Ms Logan said the commission was “receiving a persistently high level of calls and emails specifically related to disability discrimination in employment”.

The independent human rights watchdog said complaints related to disability discrimination in employment had been the most common issue reported in the last four years.

“Already this year 36 per cent of all queries to us in relation to employment have focused on disability, the highest level we have seen to date,” Ms Logan said.

She was speaking at an event marking World Day for Decent Work, attended by representatives from over 150 businesses, public bodies, trade unions, and civil society organisations. Minister of State with responsibility for disability issues Finian McGrath opened the event, which was held at the Radisson Blu Hotel, Dublin 8, on Monday.

Speaking at the conference, Ms Logan said there was persistent discrimination towards people with disabilities in workplace recruitment practices.

“Integrating reasonable accommodation as set out in law for people with disabilities into the routine recruitment, selection and employment processes is essential if we are to reverse these negative employment trends,” she said.

“This requires senior management to take a leading role in creating a culture of equality and inclusion in the workplace,” she added.

In 2016, a quarter of the complaints the commission received under the Employment Equality Acts related to discrimination on grounds of disability.

Last year that figure had increased to nearly a third of complaints, and in the first half of 2019 alone discrimination on grounds of disability related to 36 per cent of complaints.

Ms Logan announced the commission would use its statutory powers to draw up a new legal code of practice for employers, to promote greater employment of people with disabilities. Once in force the code would be admissible as evidence in court cases, or proceedings at the Workplace Relations Commission and the Labour Court, she said.

Commenting on Monday, Vivian Rath, a member of the commission’s disability advisory committee, said “people with disabilities are very familiar with our own needs and as such are best positioned to advise on the necessary supports that will enable us to be successful in our job”.