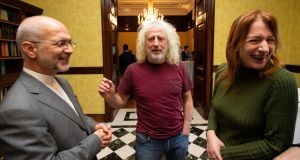 The common histories of Ireland and Iran in fighting for independence were recalled on Monday at an event in Dublin marking the 40th anniversary of the Islamic Revolution.

Recently appointed Iranian ambassador Dr Masoud Eslami drew attention to how, “over the past 100 years, the hardworking and decent people of both countries have struggled for freedom”.

He said both had “fought against foreign intervention and occupation and, tormented by deliberate famine and sanctions imposed on them by foreigners, faithfully pursued their independence and self-determination”.

He said that, in 1979, the Iranian people “under the able leadership of the late Imam Khomeini, ended a long episode of internal repression and foreign intervention with significant impact on the geopolitical settings of the region”.

Since then “Iran’s population has more than doubled, the literacy rate has gone up 92 per cent” and it now produced “95 per cent of essential goods including 95 per cent of the medicine it needs”, he said. Iran now has a population of more than 81.5 million.

Dr Eslami said there were “about 7,000 female professors in Iran’s universities” which have more female than male students. It had “70,000 female general physicians as well as 30,000 specialised doctors”. It also had “more than 2,000 female judges” while 40 per cent of its media editors were women.

He said all of this had happened “in spite of formidable challenges”.

The ambassador instanced the war with Iraq “funded by the US and its traditional European allies outside the region” as well as “certain Arab countries”. He said there were also “mischievous foreign sanctions and an intensive campaign of misinformation against Iran”.

Iran, he said, would “continue to defy illegitimate US sanctions and engage in friendly relations” with other countries. It would continue to “be at the forefront of combating terrorism” and to reject “warmongering, fuelling tensions and interfering in the internal affairs of others”.

The country attached “a special importance, on a reciprocal basis” to relations with Ireland which he looked forward to promoting “during my mission in this fabulous country”.

Among those who attended the event were TDs Clare Daly, Mick Wallace and Maureen O’Sullivan; members of the diplomatic corps; Art O’Leary, secretary general to President Michael D Higgins; the Catholic Archbishop of Dublin Diarmuid Martin; Rev Des Sinnamon of the Church of Ireland; and Shaykh Umar al-Qadri, chair of the Irish Muslim Peace and Integration Council.