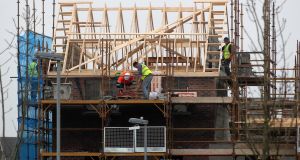 Just over 18,000 homes were built last year, according to the Central Statistics Office (CSO), almost 30 per cent less than the minimum number the Government says is needed to meeting housing demand.

Growth in apartment construction, while up slightly, still lags considerably behind house construction with 2,227 apartments built in 2017 and 2,372 built in 2018, an increase of 6.5 per cent.

The average new dwelling size is at its lowest since 2011 and was down just under five per cent in 2018 on the previous year, which the CSO said reflects the shift from one-off houses to housing estates.

Prospective house buyers should look to Dublin 15, the area with the highest number of new-home completions last year, which includes suburbs such Ashtown, Blanchardstown, Castleknock, Mulhuddart and Tyrrelstown.

The area with the next highest number of homes built was Dublin 24, including Tallaght, Firhouse and Jobstown.

Most homes were built last year in Dublin and the mid-east. Completions in these areas were particularly high in the last quarter of the year, when 60 per cent of all homes built were in Dublin and its surrounding counties, according to the CSO.

The figures were welcomed by Minister for Housing Eoghan Murphy, but he acknowledged that apartment numbers remained low. “We know that we need to build much more and that some sites were delayed because of changes made to apartment guidelines,” he said.

Mr Murphy last December removed the cap on the height of apartment buildings, but had signalled his intention to do so the previous year.

The number of homes built last year was 7,000 less than the 25,000 the Government said is the minimum needed to meet demand. While its Rebuilding Ireland housing plan, published in 2016, had set 2020 as the year to reach this target, the plan had anticipated that more than 20,000 homes would be built in 2018.