Striking nurses and midwives on picket duty at the Coombe Women and Infants University Hospital in Dublin describe the conditions that they work under and their concerns for the future of healthcare in this country. Video: Bryan O'Brien 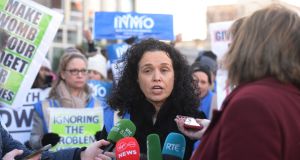 INMO’s Phil Ní Sheaghdha with Nurses and Midwives at the entrance to the Coombe hospital.Photograph: Alan Betson / The Irish Times

Nurses have said they are not overly optimistic at the prospect of talks at the Labour Court on Friday resolving the current strike.

The Labour Court invited the Irish Nurses and Midwives Organisation (INMO) and public service management to attend new talks on Friday in an attempt to avert three days of strikes scheduled to take place on Tuesday, Wednesday and Thursday of next week.

The HSE has signalled it has grave concerns about the impact the planned strikes next week will have on services for patients.

Arriving at the Labour Court the general secretary of the INMO Phil Ní Sheaghdha said her union had not seen any indication that the Government’s position had changed.

“Our members have given us a very clear indication that they want real movement on the issue of (staff) recruitment and retention and that has not changed.”

“We will hear what the Government’s position is . We obviously respect the invitation from the Labour Court and we will see how we get on.”

The Government has maintained the nurses’ pay demands would cost €300 million and less to knock- on claims from other public service groups.

The general secretary of the Irish Congress of Trade Unions Patricia King said the current strike by nurses was the most serious industrial dispute the country had experienced for many years.

She said she was disappointed with the reaction to any of the inroads she had sought to make in the dispute.