‘We don’t want to live like this, but we have nowhere else to go.’ 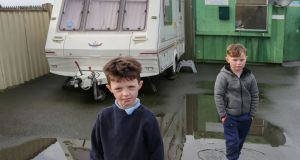 Cousins Connie and Rico Delaney at the Carrowbrowne temporary halting site beside the Headford Road in Galway. Photograph: Joe O’Shughnessy

A group of 13 Traveller families, including over 40 children, say they feel like they have been “left to die” at a rat-infested site just outside Galway city.

The Carrowbrowne temporary halting site, reached at the end of a side road, is next to a waste-recycling plant on the Headford Road. It was designated as “temporary” 11 years ago but, despite repeated undertakings by Galway City Council that alternative accommodation would be provided, still none is planned.

The site has been home to the extended Delaney family since 2008, some of whom had previously been in dangerous conditions by the side of a main road.

Each of the families has a mobile home, with an outhouse – a small shipping container – with washing and cooking facilities. These are damp, freezing and potted with holes. There are no play facilities and the families each pay rent of about €40 a week.

During 2010 High Court proceedings concerning the site, the council submitted documents stating its plan to provide “two halting sites subject to availability of land and resources” in the city. In 2015 planning permission for the site expired.

The basic facilities are in serious disrepair, with damp, mould and rotting floors and walls in all the containers. Some have no glass in the window frames. Sinks are coming away from the walls, and floors have holes or are sagging.

The greatest immediate concern for the families, however, is rats. The families show holes in the walls and floors of the containers which they say have been chewed through by rodents. They show photographs of dead and live rats and one woman describes last week opening her tumble-drier to find two rats “warm and roasting with the heat” among her laundry.

Nora Delaney, who has five children, shows where she stuffs tissue between the kitchen countertop and wall “so they [the rats] won’t come up on top of me when I’m cooking . . . We pay €40 a week. I’d sooner pay €60 for a bit of comfort.”

Her husband, Patrick, has put wood boards down on the sagging floor to cover rat-holes and has nailed wood across holes in the walls, which are very damp to touch, of the bathroom.

The council has sent an exterminator to the site and poison has been laid, but the families say it has not deterred the rats. They themselves have bought traps which they say “cannot keep up with the rats”.

Angela Delaney, who is expecting her fourth child this week, has been in contact with the council repeatedly asking that “something be done about the sheds” but has not had any response, she says.

“The kids won’t go into them on their own – too afraid of the rats.” She and her husband, Cornelius, pay €42 a week rent.

In several containers the families showed electrical wires sitting against damp walls and floors, while in the main electric section of one, water is pouring in on top of wires and plugs.

The residents are in “despair at this stage”, says Bridget Kelly of the Galway Traveller Movement. Their hopes were raised in December 2012 when the council’s chief executive, Brendan McGrath, told a monthly council meeting he would use his executive powers if necessary to provide two new Traveller sites on the west side of the city. He faced strong objection from councillors and no sites were provided.

Last week, Mr McGrath did use his executive powers to build 15 modular homes for homeless families on a similar site, also on Galway’s west side.

“We don’t begrudge those families homes, of course not,” says Angela. “But it shows they can use their powers to provide housing when they want to.”

Since 2010, of the €2.57 million allocated to Galway city by the Department of Housing for Traveller accommodation, the council has spent €1.46 million (56 per cent).

A spokesman for Galway City Council says the council intends closing the site. “In the interim, the council is examining solutions to address existing conditions on site including replacement units if possible.

“Proposals for alternative accommodation are currently being considered in the context of the Traveller Accommodation Programme 2019-2024, currently at draft stage and to be issued for public consultation in April 2019.

Angela Delaney says she does not want her children, who have lived all their lives on the site, believing their conditions are normal. “This is not normal,” she says.

Her husband, Cornelius, adds: “We don’t want to live like this, but we have nowhere else to go. I really think sometimes the council has left us here to die.”