New Bishop of Catholic diocese of Clogher is ordained in Monaghan

‘The God of surprises surely has a sense of fun. All I can promise is to do my best’ 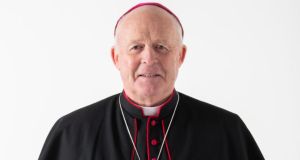 The episcopal ordination of the new Bishop of Clogher Larry Duffy took place at St Macartan’s Cathedral in Monaghan on Sunday.

It follows the announcemet by the Vatican of his appointment last December. He succeeds Bishop Liam MacDaid who retired for health reasons in 2016. He attended today’s episcopal ordination as did his predecessor Bishop Joseph Duffy.

Chief celebrant at the ordination Mass was the Catholic primate Archbishop Eamon Martin, assisted by Bishop of Down and Connor Noel Traenor and the papal nuncio Archbishop Jude Okolo.

The Catholic diocese of Clogher encompasses all of Monaghan, most of Co Fermanagh and parts of Tyrone, Donegal, Louth and Cavan. It has a Catholic population of 88,000 across 37 parishes served by 58 priests and 2 deacons.

Born at Ballybay Co Monaghan in November 1951 and ordained in 1976 Bishop Duffy has served in Enniskillen, Castleblayney, Monaghan and Rackwallace (Cathedral parish), Ederney, Clones, and Carrickmacross parishes in Clogher diocese.

In addition, he spent four years ministering in Kitui diocese in Kenya.

An avid GAA fan and keen golfer, Bishop Duffy had been parish priest in Carrickmacross since 2013.

At his episcopal ordination today the new Bishop said that: “when the Diocese of Clogher became vacant, I frequently prayed in public that the Holy Spirit would guide those responsible for choosing a Bishop, and that the one chosen would be God’s Choice.What a shock when I was invited to serve. The God of surprises surely has a sense of fun. All I can promise is to do my best.”

In his homily Archbishop Martin said: “my brother Larry, this ‘call within a call’ will bring you many new responsibilities and challenges. As bishop, you may sometimes feel yourself sinking beneath so many competing demands and expectations. Ach ná bíodh eagla ortsa! [But do not be afraid!]”