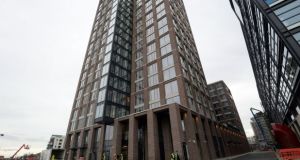 Capital Dock, the State’s tallest apartment block, was completed late last year on Sir John Rogerson’s Quay, becoming one of the most expensive places to live, with prices starting at €3,850 a month.

“This is a form of social cleansing – denying young families the opportunity to live in their local area and ensuring only extremely high earners can live in the docklands. It is hugely disappointing and is contrary to the sustainable development of the docklands, ” Mr Humphreys said.

Under the planning laws, developers must provide 10 per cent of any development of 10 homes or more to local authorities at a discounted price. Changes made in 2015 mean councils can no longer take cash from the developer instead of social housing, but they can take homes or land at another location.

Kennedy Wilson proposes satisfying its social housing obligations for Capital Dock and its other apartment development at Clancy Quay close to Kilmainham, with 40 apartments at its Herberton development in Rialto.

Dublin City Council’s head of housing Brendan Kenny said the agreement with Kennedy Wilson “has not yet been finalised” but the Rialto apartments would represent better value for money for the council.

“Normally we would prefer to take units on site, but that is very difficult in the docklands, because the costs involved do not represent good value for money.”

Councillors would likely be informed of the proposal later this week, Mr Kenny said. “It is perfectly legitimate, but it is not ideal. It is still subject to finalisation, we haven’t reached a formal agreement yet, but prices in the docklands are way off the limits of what we can pay.”

Legislation obliging developers to provide social housing had been intended to secure the homes on-site, Mr Humphreys said. “This may be obeying the letter of the law, but it is completely ignoring the spirit of it. It was intended that these homes would be on-site, or in the same geographical area – not miles away.”

Meanwhile, the council is unlikely to go ahead with its first prefabricated “rapid-build” social housing apartment block because of spiralling construction costs.

The council had planned to build five apartments on a derelict site on Fishamble Street beside Christchurch at a cost of €1.5 million, but Mr Kenny said the cheapest construction tender for the job was €3 million, or €600,000 per apartment.

“We have yet to make a final decision on it, but we cannot justify that cost in value-for-money terms.”

The council might sell the site, or use it to build a community centre, Mr Kenny said, but there might also be an opportunity to negotiate a site exchange with a docklands developer in relation to social housing, he said.

Despite the Fishamble Street setback, the council plans to continue its programme of rapid-build apartments, Mr Kenny said.

“We knew this was going to be a particularly awkward site, but that will absolutely not stop us from going ahead with volumetric rapid build at other sites, including Bunratty Road in Coolock, a city-centre site at Bonham Street, two sites at Cork Street and a site in Chapelizod.”

Volumetric rapid-build schemes involve the prefabrication of apartment units off-site which are then assembled on the ground over a short period of time.