Farrell brothers: The two most senior Irish clerics in the Vatican

Cardinal and bishop were members of controversial Legionaries of Christ 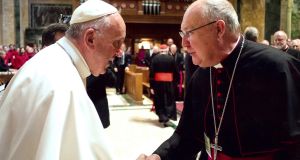 Cardinal Kevin Farrell (70) is the most senior Irishman at the Vatican and one of two brothers serving there.

His older brother Bishop Brian Farrell (73) is secretary to the Pontifical Council for Promoting Christian Unity and has worked at the Vatican since 1981.

Both are from Drimnagh in Dublin and were educated by the Christian Brothers. Neither has served as a priest in Ireland.

Cardinal Farrell is also the Vatican official with responsibility for co-ordinating efforts around the World Meeting of Families 2018 in Dublin next August, which will include a visit by Pope Francis.

Sources have suggested that he may have played a significant role in the removal of five pictures of same-sex couples from preparatory booklets for WMoF2018, circulated to Irish parishes before Christmas.

He has served most of his priestly life in the Americas. Ordained in 1978, he served as chaplain at the Catholic University of Monterrey in Mexico while also acting as general administrator of the Legionaries of Christ with responsibilities for seminaries and schools in Italy, Spain and Ireland.

In 1984, by which time he had left the Legionaries of Christ, he became a priest of the US archdiocese of Washington and in 1986 succeeded then Fr (now Cardinal Archbishop of Boston) Seán O’Malley as director of the Washington archdiocese’s Spanish Catholic Centre.

Speaking of that period of his life, on a visit to Dublin last June, he recalled that he was “known in Washington DC as priest Number 39. I was the 39th Irish-born priest in the archdiocese of Washington. Today, unfortunately, I’m number five.”

In December 2001 he was named auxiliary bishop of Washington and in March 2007 was appointed Bishop of Dallas.

In August 2016 he was appointed prefect of the Vatican’s newly-created Dicastery for the Laity, Family and Life and created Cardinal by Pope Francis in November 2016.

Bishop Brian Farrell was born in Dublin in 1944. He entered the Congregation of the Legionaries of Christ in 1961 and began his novitiate in Salamanca before continuing his studies at the Gregorian University in Rome until 1966.

On January 1st, 1999, he was nominated head of the general affairs section of the secretariat of state and in December 2002 was appointed secretary to the Vatican’s Council for Promoting Christian Unity. His ordination as bishop in January 2003 was attended by his close friend, the then archbishop of Dublin Cardinal Desmond Connell.

With the release in 2015 of State papers for 1985 it emerged that the then Fr Brian Farrell and Msgr Giuseppe Lazzarotto of the Vatican’s secretariat of state and Council for the Public Affairs of the Church opposed legislation allowing the sale of condoms in Ireland.

At a meeting with an unnamed official from Ireland’s Embassy to the Holy See, they said Irish bishops opposing the law did so not just because it was against Catholic teaching but also because it was “not in the interests of the common good.” Msgr Lazzarotto, as Archbishop Lazzarotto, was papal nuncio to Ireland from 2000 to 2007.