Biggest challenge is keeping girls in school and out of forced marriage, says principal

Sr Orla Treacy from Bray is principal of Loreto Rumbek, South Sudan. The school first opened in 2008 and provides a much needed place of education and refuge for girls aged 5-20. Video: Bryan O'Brien 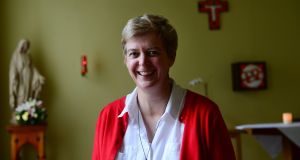 Sr Orla Treacy, principal of Loreto Rumbek primary and secondary school and primary healthcare centre in Rumbek, South Sudan. “We have been threatened at gunpoint, we have been insulted, all number of problems.” Photograph: Bryan O’Brien

In February 2006, Sr Orla Treacy stepped off a plane in Sudan ready to set up a girls’ boarding school in a remote region in the south of the country. She had been told the project was already under way and had reassured her parents she would be home in Ireland by the end of the year. However, the 33-year-old nun arrived at the site outside the town of Rumbek only to find an empty field with no buildings.

“We were told not to worry, that everything would be ready by Easter. It took two years for the building to reach the point where we could actually start, and then we discovered we were also supposed to open a primary school and clinic for the local community.”

Sr Treacy also faced the challenge of convincing local families to send their daughters to a secondary school in a country where only a third of girls enrol in primary school. Of these, just 7 per cent finish their primary education and only 2 per cent make it into secondary education. Less than 1 per cent actually graduate. More than half of girls in South Sudan are married before the age of 18, and 17 per cent before they turn 15.

“If you live in a culture where marriage is more popular than school, it’s very hard to change that mentality. The girl is married for a dowry of cows so she’s considered a wealth to the family. She’s also the property of the extended family, not just the mother and father.”

The Loreto sisters decided fathers would sign an agreement with the school promising to allow their daughters to complete their education. However, extended family members such as uncles would often turn up at the gates demanding their teenage niece be released for marriage. “We have been threatened at gunpoint, we have been insulted, all number of problems because she is a woman and should be sacrificed for the sake of the greater good. Technically it’s a boarding school but I call it a women’s refuge because you’re constantly trying to protect these girls from forced marriage.”

When Sr Treacy first decided to become a nun, she never imagined she would end up the principal of a school in a war-torn state in east Africa. In fact, when she first told friends and siblings about her decision to enter the church, they told her she was crazy.

“I thought I was crazy too. I realised it wasn’t fashionable or popular to become a nun at that time. I talked to one of my brothers and he told me to travel the world and then see how I felt.”

Sr Treacy put the decision on hold and studied to become a religion teacher at the Mater Dei Institute. During the summer after her final year in college, she worked in Calcutta. “That was a real changing point for me. There was a lot of hunger and poverty in Calcutta in the early ’90s and that really struck me. I had accepted a job to teach religion with the Presentation Brothers in Cork city and worked there for two years but by the age of 23 I realised that life wasn’t for me and I joined the Loreto sisters.”

It was only when Sr Treacy returned to Calcutta eight years later that she began to consider working overseas. She discovered the Irish Loreto sisters were setting up a new mission in Sudan following the country’s 2005 Comprehensive Peace Agreement. It was believed the agreement would bring peace and stability following decades of conflict. “There was a sense that great things were happening in south Sudan. And so three of us set out there in February 2008.”

I work with people who live very much on the margins: life and death, hunger and despair. Every day they live on the edge. And yet in that you can still glimpse love and hope every day

Ten years later Sr Treacy is still running the Rumbek secondary boarding school, the primary school and the local clinic. The past decade has not been easy.

In 2011 South Sudan gained independence from Sudan. However, in 2013 civil war broke out in the new country, with some 200,000 people forced to flee their homes and more than two million displaced.

Hunger continues to be a huge problem in this country of 12 million people.

“When we started the primary school we used to not feed the kids, but we’ve found over the past two years there’s a great hunger, so now we feed everybody. We also need to provide healthcare because many of them can’t afford medicine or access to good treatment.”

As it celebrates its 10th anniversary, the school is struggling more than ever financially. However, Sr Treacy remains hopeful for the school’s future and the education of girls in the Rumbek area. “I work with people who live very much on the margins: life and death, hunger and despair. Every day they live on the edge. And yet in that you can still glimpse love and hope every day.”

After more than two decades as a nun, Sr Treacy is also confident she made the right decision by joining the Loreto sisters. “In life you’re always wondering what if or what might have been. Being a nun is not always perfect and there are moments when I wonder what the hell did I do? But I don’t think any relationship is perfect and I have certainly found a peacefulness in myself. I don’t worry about the future too much and I’m very happy in the role I’ve chosen.”