Data analytics staff not obliged to work on abortion campaign 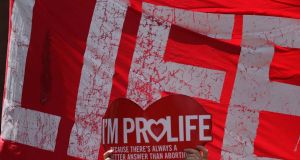 Members of the anti-abortion campaign this week told The Irish Times that their efforts to prevent the liberalisation of the State’s abortion regime would focus on social media and on-the-ground canvassing. Photograph: Nick Bradshaw

Staff working for a UK data analytics company hired by Irish anti-abortion activists will be able to choose not to work on the campaign against repealing the Eighth Amendment.

Kanto – a London-based political consultancy – has refused to name the groups it is working with on the referendum but says it has a “red-line policy” and that staff who do not want to be involved with a particular campaign can “opt out”.

“Working on political campaigns can be incredibly stressful and it is important to support the well-being of staff,” Thomas Borwick (30), Kanto’s managing director said.

Members of the anti-abortion campaign this week told The Irish Times that their efforts to prevent the liberalisation of the State’s abortion regime would focus on social media and on-the-ground canvassing as they feel shut out of the debate by much of the media and the political establishment.

Kanto specialises in data analytics online campaigning and firms in this area often use public data to contact voters both through direct mail and on social media.

The UK Information Commissioner is looking into the use of data during the Brexit campaign and one of the 30 organisations who are part of that inquiry is Voter Consultancy Limited, in which Mr Borwick is the sole shareholder. Others involved Cambridge Analytical and a number of British political parties.

Voter Consultancy Limited hit the headlines in November after Facebook adverts paid for by it targeted anti-Brexit MPs, and urged their constituents to contact them directly to complain. At the time, pro-EU MP Anna Soubry said Mr Borwick “hasn’t issued death threats, but by calling us anti-democratic, he is stoking and fuelling the fire”.

Mr Borwick, who was Vote Leave’s chief technology officer during the Brexit referendum campaign, said “we are a political technology company. We work with campaigns that approach us”.

He has previously worked as a consultant for Cambridge Analytical, a data-mining company owned by Robert Mercer, a billionaire who has backed Donald Trump’s election campaign and the “alt-right” website Breitbart News.

Concerns have been raised about online campaigning ahead of the upcoming abortion referendum. Gavin Sheridan, co-founder of transparency advocacy group Right to Know, said a lack of regulation of political advertising in Ireland has created a “wild west” of sorts.

“In Ireland there are no transparency obligations to disclose what ads are or have been used, who they are targeting, who is paying, and how many views or interactions those ads are receiving,” he said, adding that audiences have a right to know all of this information.

Fianna Fáil has called for online campaigns that target voters to be regulated ahead of the referendum. “Campaigns online can be more pervasive and far more targeted than traditional door-knocking and canvassing,” said the party’s technology spokesman, James Lawless TD.

Mr Borwick said that the data analytic industry “needed to work really hard to explain what we do” but that his was “an open campaign company”.

“Understanding an audience and being able to target that audience precisely on social media means campaigns with relatively low budgets can deliver very specific messages to discrete audiences extremely efficiently.”