Mary McAleese barred by Vatican from conference on women

Event organisers respond by inviting ex-president to be keynote speaker 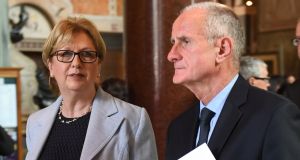 The Vatican has barred former President of Ireland Mary McAleese from taking part in a conference to mark International Women’s Day which was originally due to take place in the Holy See.

The list of potential speakers required approval from a cardinal, but Mrs McAleese was not granted permission to participate.

As a result, the organisers have moved the “Why Women Matter” conference on March 8th to premises outside the Vatican, and have also invited Mrs McAleese to be keynote speaker. She had previously been asked to take part in a panel discussion at the event.

The conference was organised by the Voices of Faith group, which is seeking to convince the Vatican that women “have the expertise, skills and gifts to play a full leadership role in the church”.

The inclusion of Mary McAleese and two other speakers on its programme was opposed by Cardinal Kevin Farrell, prefect of the Dicastery for the Laity, Family and Life. A Dubliner who spent most of his clerical life in the US, he is the most senior Irishman at the Vatican.

Among the other speakers barred was Ssenfuka Joanita Warry, a lesbian Catholic who is pioneering LGBT rights in Uganda. *

Chantal Götz, managing director of Voices of Faith, told The Irish Times that the list of speakers required approval from the cardinal.

“Cardinal Farrell sent back to me the list of names who he gave permission(for). Mary McAleese and two others were not on it,” she said. “Unfortunately, unsuccessful efforts were made to have the Cardinal change his mind.”

Rather than exclude the three women, “we decided ourselves to move the conference to a venue outside the Vatican, she said, adding Mrs McAleese was then asked to be the keynote speaker.

Ms Götz said it was the first time she had encountered any issues since the group began organising similar conferences in 2014.

Mrs McAleese declined to comment, saying she is awaiting a reply from Pope Francis to a letter she sent him on the matter.

Cardinal Farrell is the Vatican official with responsibility for co-ordinating efforts around the World Meeting of Families 2018 in Dublin next August, which will include a visit by Pope Francis.