Child with Down Syndrome to feature in anti-abortion billboard campaign 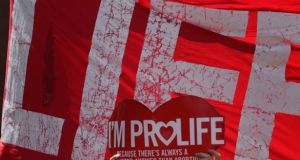 Disability Voices for Life will join the Save the 8th Campaign at a press conference in Dublin on Tuesday morning. File photograph: Nick Bradshaw

A ‘Save the 8th’ billboard campaign, featuring Joseph Cronin, a boy with Down syndrome, will begin nationwide on Tuesday in opposition to repeal of the Eighth Amendment to the Constitution.

A mobile billboard featuring Joseph and an #AbortionDiscriminates message toured Dublin in July 2016 as part of a campaign by the pro-life group Youth Defence.

The boy’s mother Caitríona Cronin said “we want people to see Joseph for what he is - a smart, adorable, funny little boy who has a right to life here in Ireland when in so many other countries that right to life has been taken away. 90 per cent of people like Joseph are now aborted before birth in Britain, and that means something, it’s not just a number.”

A new organisation, Disability Voices for Life, will join the Save the 8th Campaign at a press conference in Dublin on Tuesday morning.

Spokesman for the group, Renua chairman Michael O’Dowd, confirmed that many of the individuals involved in the new group were already members of various pro-life organisations. His son Conor has Down syndrome.

He said the facts were impossible to ignore.

A statement on behalf of Disability Voices for Life said they refuse “to be silenced in the debate around abortion currently taking place in Ireland”.

They found it “appalling to see media commentators and abortion campaigners seek to dictate terms to families of children with disabilities in regard to what they could and could not say, and whether photographs of their children should be seen”.

Anne Trainer, whose son Kevin has Down syndrome, said “we have an absolute right to include our children and our families in this debate”.

She said she was very disappointed that Down Syndrome Ireland chose to issue a statement which implied criticism of parents who are engaged in “pro-life” activities.

“We have every right to express our deep concern at the proposal to introduce abortion into the country.”

Ms Trainer took part in the July 2015 Rally for Life in Dublin which was organised by Youth Defence, the Life Institute and Precious Life.

The Disability Voices for Life statement criticised media commentators, “like Fintan O’Toole of The Irish Times” who “ were expressing anger and upset when the truth regarding the elimination of people with Down syndrome was highlighted, but they expressed no anger and upset at the fact that 90 per cent of people with Down syndrome were being aborted”.

Chairman of the Institute of Obstetricians and Gynaecologists Dr Peter Boylan, former master of the National Maternity Hospital, said on RTÉ News at One on Monday that, under proposed legislation, it “ really is very misleading to say that people with Down syndrome will not be born in the future and I think a lot of people with Down syndrome find this whole discussion distressing and they find it distasteful that they are being used in this way.”

Last week Down Syndrome Ireland, which represents and supports 3,500 members, issued a statement “respectfully asking both sides of the campaign debate, all political parties and any other interested groups to stop exploiting children and adults with Down syndrome to promote their campaign views”.

It reminded campaigners that people with Down syndrome listen to the news and read media articles, including social media content.

“We ask that the tone of the debate is respectful towards all people with disabilities.”

Contacted for a response to this latest development, a spokeswoman for Down Syndrome Ireland said they had no further comment to make.