Number of children who went through institutions investigated by Ryan Commission is about a quarter of 170,000 previously cited 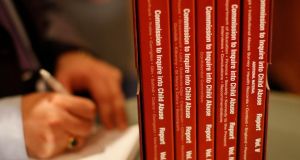 Justice Seán Ryan said ‘it appears that the total given in the report was derived by adding the yearly figures for the population in the institutions but that did not take account of the fact that children were counted in each year of detention’. Photograph: Peter Morrison/AP

New figures indicate that the number of children who went through institutions investigated by the Commission to Inquire into Child Abuse is about a quarter of the 170,000 previously cited.

In a statement on the commission website on Monday, its chair Mr Justice Seán Ryan said “the commission’s report published in May 2009 contains a seriously erroneous statistic according to the general agreement of relevant experts and bodies.

“In two places it states that the total number of children who were admitted to Industrial Schools between 1936 and 1970 was approximately 170,000.”

The commission had since had correspondence “disputing this total and citing the work of Prof Eoin O’Sullivan among others. The chairperson has consulted Prof O’Sullivan, Prof David Gwynn Morgan, the Department of Education and Skills and the other commissioners and is of the view that the number stated in the report is not correct”.

Justice Ryan said “it appears that the total given in the report was derived by adding the yearly figures for the population in the institutions but that did not take account of the fact that children were counted in each year of detention”.

While it was not possible to establish a precise figure, he said, “the department’s calculation of the number of children in Industrial Schools and Reformatories from 1930-1970 and beyond is approximately 42,000 or somewhat higher.”

The question of how to handle historical cases of child abuse will be discussed at the Oireachtas Joint Committee on Education and Skills on Tuesday, when a number of survivors, lawyers, historians and archivists will voice concerns about the Retention of Records Bill introduced by Minister Joe McHugh.

It proposes that all documents gathered by the Ryan Commission, the Redress Board, and the Redress Review Committee be sent to the National Archives and sealed for at least the next 75 years.

The Ryan Commission consisted of two strands, the Investigation Committee and the Confidential Committee.

In an interview with The Irish Times last May, Mr Justice Ryan said people gave evidence to the confidential committee on the basis that it was “utterly confidential, full stop, end of story”.

He added: “As to the investigation committee, every hearing about abuse or what happened to an individual had a double lock. The section says that you can’t identify the person nor can you give information that would enable the person to be identified.”

He asked: “How do you deem that not to be the basis on which people gave evidence? They’ve said maybe 75 years, the truth is there isn’t a way out.”