Women in direct provision being ‘pushed into prostitution’ 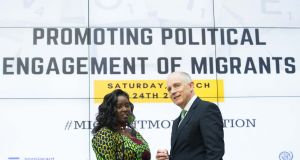 In May, Akidwa, the national network of migrant women, submitted a report to the Joint Oireachtas Committee on Justice and Equality warning that women in direct provision centres were being pushed into prostitution.

It said many women, and in some cases children, are offered money for sex by staff, other residents and neighbours from local towns.

Most women who go through the system have been propositioned by a stranger near where they live, while others are groomed by male residents operating as pimps within the accommodation, says Salome Mbugua of Akidwa. This, she adds, is happening in cities, towns and in rural areas.

Most of those engaging in prostitution are reluctant to admit it for fear of being seen as “bad women”, says Mbugua.

“What we hear every time is there’s a lot of stress in terms of sustaining family, health and wellbeing. Most of them don’t have jobs and don’t have enough to meet the needs of their children.”

While the introduction last year of the right to work for asylum seekers means some women can access formal employment, those who are appealing a rejected application and, as a result, spend longer in the system, still risk turning to prostitution to make money.

People become desperate when forced to survive on a small weekly stipend, particularly when they feel they must provide for their children, says Dr Liam Thornton of the UCD school of law.

“It’s been going on since 2000. If you’re going to demean a person and force them to live on €38.30 a week, some people will turn to sex work. It’s survival work; we’re doing that to people.”

Amanda Keane of Ruhama, which supports women affected by prostitution, says it remains unclear how many women in direct provision are resorting to prostitution.

One woman, who spoke on condition of anonymity, says male asylum seekers are often the people who act as a point of contact between men who approach direct provision accommodation looking for sex and women in the centre.

“The cars pull up outside and they’ll meet a guy who lives here and ask can you hook us up with some girls.”

The same woman says she was once approached by a male asylum seeker who said she could make €100 per day by having sex for five minutes.

“He knew I had kids and told me you’ll make money and be supporting your children. When I told him I wasn’t interested he asked, ‘why are you refusing this opportunity, don’t you know how to have sex?’ I told him I have sex, but I need to have feelings to do it.”

The authorities do not carry out vulnerability assessments on asylum seekers on arrival in the State, despite a legal responsibility to do so under the European Union’s reception and conditions directive.

Akidwa warned in its Oireachtas submission that without these assessments, there is no assurance vulnerable women who have already suffered sexual assault and trafficking before coming to Ireland will receive the care they need.

Earlier this year, the US state department criticised the Irish Government publicly for failing to provide adequate supports to victims.

In the absence of vulnerability assessments, the State is “under-identifying victims” who may have previously been trafficked but do not mention this upon arrival in the country, says Brian Killoran of the Immigrant Council of Ireland. Once a person submits an asylum application they cannot be identified as victims of trafficking.

Since the introduction of anti-trafficking legislation in 2008, the Reception and Integration Agency has housed victims in direct provision centres.

Civil society groups had hoped women recovering from sexual exploitation would stay in specialised refuges or supported housing, says Nusha Yonkova, gender and anti-trafficking expert with the council. The State’s decision to house women who had been trafficked in direct provision is a “huge disappointment”, she says.

“Direct provision is very inappropriate because it is not gender-specific accommodation and not conducive to recovery for women who have been subjected to abuse. They have to share the rooms with other women and don’t have any privacy.”

While victims are assured anonymity, news of what they have gone through often leaks through the centre.

With just one female-only accommodation centre for asylum seekers in the country, most survivors are housed in close quarters with men, which risks further trauma, says Keane. Some of the most vulnerable women also risk being re-trafficked.

But separating a woman within that mixed-gender setting can lead to further problems.

“One woman we worked with was placed in a room separate to other people,” says Keane. “Groups of men would come to her room, put pornographic images under her door and try to get her to perform sexual acts. It was because she was isolated and already vulnerable, she was an easy target.”

In some cases, women who have previously suffered sexual violence disappear completely from the system, says Keane, adding that in the past year two women receiving support from Ruhama went missing.

One was staying in a direct provision centre and the other in a women’s refugee. “We would suspect they have been trafficked into the sex trade again. People don’t just disappear.”

When asked how many trafficked women have gone missing from the direct provision system in the past five years, the Department of Justice referred the matter on to the Health Service Executive.

A HSE spokeswoman said victims attended their anti-human trafficking service on a voluntary basis, but they were unaware of any women who had gone missing from direct provision.

The Immigrant Council of Ireland has, however, recorded women going missing.

“On at least two occasions women we worked with disappeared,” says Yonkova. “They were probably recruited and are still at risk of being trafficked by criminal groups.”

The nationalities of women who are trafficked to Ireland vary, with those from Vietnam, Pakistan, Uganda, Kenya, South Africa and Bulgaria seeking support, says Yonkova. But the majority come from Brazil, Nigeria and Romania.

While most victims are adults, one in 10 cases referred through the immigrant council are children, adds Yonkova.

Trafficked women are offered a 60-day period of “recovery and reflection” while staying in direct provision and receive a temporary six-month residency permit that can be renewed.

However, up until earlier this year, a number of women said they had received letters from the Government indicating they should leave the centres as they had permission to work or access social welfare payments, says Killoran.

The letters stopped coming after Killoran raised the problem at an Oireachtas justice committee hearing. But civil society groups remain concerned about the wellbeing of trafficked women in direct provision.

They need to be housed in rescue shelters where they have full anonymity and protection from being trafficked back into the system, says Killoran.

Yonkova agrees that gender-specific services would give survivors a “fighting chance” and recommends the State try to replicate the Northern Ireland system where migrant women and girls who have been sexually abused are referred to Women’s Aid and housed in shelters.