‘Cherbourg is wide open. There’s next to no security’, says haulier 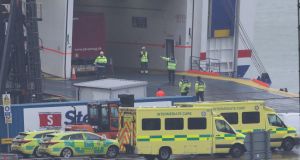 The scene at Rosslare Europort in Co Wexford last Thursday, after 16 people were found alive in the back of a truck on ferry sailing from France. Photograph: Niall Carson/PA Wire

The issue of refugees stowing away on trucks bound for Rosslare needs to be addressed at national level, according to a prominent Wexford businessman.

Wexford hotelier and Rosslare resident, Liam Griffin, who managed the 1996 All-Ireland winning Wexford hurling team, said people had been shocked to learn that 16 Kurdish refugees were found in a truck on board the Stena Line Ferries ship from Cherbourg to Rosslare Port last Thursday.

“It’s a regular occurrence with people trying to get in through Rosslare – what was different this time was the numbers involved and listening to a woman from the UN on Prime Time the other night, the problem is going to grow,” Mr Griffin said.

“She is clearly an authority on the problem and she said that the situation is going to get worse because these people have nowhere to go, they are fleeing war zones so it’s inevitable in Europe for the foreseeable future.”

Mr Griffin said people in Rosslare were all relieved nobody had died in the incident, but they believed the matter needs to be addressed nationally.

“People here see Rosslare as the local port but most people I have spoken to over the last day or so, they don’t feel they have any real power or say in the matter – they feel it is a national issue that has to be resolved at national level.

“At the same time, I think nearly everyone’s first reaction was just one of relief that they arrived here alive. It would have been devastating if 16 people had been taken dead off a lorry in Rosslare, so there was real relief over that.”

Meanwhile, haulier Larry O’Brien from Campile said the problem had grown worse since French authorities broke up the refugee camp in Calais known as the Jungle.

“Since the Jungle was broken up what has happened is that the refugees have dispersed around northern France. There are some still in Calais but you could see them hiding in the ditches 40-50km out of Paris,” he says.

“I was getting diesel recently about 50km outside Calais and there was a Danish driver pulling out front of me when two [migrants] jumped out in front of him and he had to brake hard to avoid them, and then two more got into his trailer.”

“Calais is well policed now and it’s hard for them to get on board a trailer there but the problem has spread out and Cherbourg is wide open. There’s next to no security at all at Cherbourg.

“People feel sorry for them because a lot of them are coming from war torn countries and fair dues to them but there aren’t too many feeling sorry for the haulier who gets caught up in this even through no fault of his own.”

“Pulling in to get parking is where the driver is most vulnerable particularly if he is pulling overnight to get some sleep but you really can’t sleep north of Paris because these fellows will try to get into your trailer.”

According to Mr O’Brien, the issue needs to be addressed at European Union level for, while the most recent incident highlighted the problem in Cherbourg, security is also lax at many Belgian ports.

“The French authorities have got very tight in Calais but Belgian ports like Ostend and Zeebrugge are very lax so they will have to tighten up everywhere even though that’s going to result in more checks and drivers losing time,” he says.

Eleven plead not guilty to exploitation, neglect and sexual abuse of four children

1 ‘I thought it was a hoax’: Patient dies after Texas Covid party
2 US passengers fly into Dublin: ‘I’m here for six days. I guess I’ll have to stay inside’
3 Johnny Depp tells court Amber Heard threw ‘haymaker’ punch at him
4 Maureen Dowd: Biden has his limitations but he’s no Trump
5 Coronavirus: No new deaths and 11 further cases reported
Real news has value SUBSCRIBE