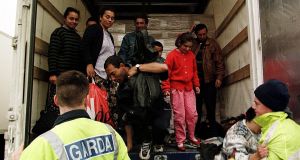 Romanians in the back of a freight truck found trying to enter the country at Rosslare Port in 1998. Photograph: Dylan Vaughan

On a summer evening in 1998, officials carrying out checks on freight trucks arriving from France discovered 20 children hidden among the contents of two containers. They had been travelling for seven days.

All from Romania, they were accompanied by 27 adults and their arrival from Cherbourg led to immediate accommodation problems. Around that time, about 200 recently arrived Romanians were already in Rosslare.

Later, as the group applied for asylum, gardaí expected further arrivals. There was a growing sense of local unease.

Within communities, rumours were spreading of preferential treatment being given to asylum seekers over Irish people; of luxury apartments paid for by the State. The Wexford People newspaper ran an editorial suggesting some might be attempting to get young girls pregnant to secure a passport.

Even then, two years before the creation of the direct provision system, Rosslare emerged as a fledgling example of a community push-back. Twenty years on, if the reach, cause and severity of anti-immigrant feeling are open to debate, its consistency is not.

A report published last year by the Social Change Initiative, a Belfast-based international charity, found almost half (43 per cent) of people in Ireland believe refugees got preferential treatment and access to benefits.

It also found a “general openness to immigration” with 35 per cent “very open” compared to 17 per cent with “negative attitudes”.

However, the 44 per cent found to be open to immigration but expressing “certain concerns and anxieties” is perhaps the most important statistic, given the apparent number of people eager to contest Government plans for direct provision but who quickly dismiss any notion of prejudice.

This year, as asylum seeker numbers again increase, opposition is focusing on a lack of local consultation on direct provision centres and, ostensibly, their conditions.

Opponents to accommodation proposed for Ballinamore, Co Leitrim, last month claimed Minister of State David Stanton had said he would “pause” the plans. The department neither confirmed nor denied this, saying it was engaging in “further dialogue”.

In 2017, protesters gathered outside a reception centre in Killarney, where, again, a lack of consultation was cited, and the following year, the Caiseal Mara Hotel in Moville, Co Donegal, earmarked for asylum seekers, was set on fire. Three months later the same thing happened at Shannon Key West Hotel in Rooskey, Co Roscommon – twice. Plans for its use were shelved.

In September, Independent TD Noel Grealish told a meeting in Oughterard, Co Galway, attended by 800 people concerned over plans for a direct provision centre, that Africans were coming “to sponge off the system here in Ireland”. Those plans too were eventually withdrawn, this time by the owner.

Nick Henderson, of the Irish Refugee Council (IRC), says direct provision is by its nature an “institutional beast” supporting a fear of the other.

“Parking people on the edge of town in an old hotel reinforces that,” he said.

Some have objected to asylum centres opening in their areas on the basis of the rise in population straining local services. Former High Court judge Mr Justice Bryan MacMahon, who chaired a working group on direct provision reform, says there is a point to this.

“A lot of the villages now have no GP, so they’re worried if another 300 people come in with medical needs that they won’t be able to get an appointment and that I think is a legitimate fear.”

Many of the issues stem from some people’s suspicion that “economic migrants” are using asylum procedures to secure a better life.

This suspicion is one that University College Dublin law lecturer and direct provision expert Dr Liam Thornton believes has been propagated by the media.

In a 2007 paper, Upon the Limits of Rights Regimes, he describes a reactionary response to increasing asylum seekers.

Similarly, sociologist Dr Lucy Michael, who specialises in racism, has said discourse in the media has encouraged hostility.

There is a flipside. Everywhere there are opponents, there are supporters. In Achill, Moville and Rooskey, other sections of the communities formed welcoming groups and held counter-demonstrations. Racism and arson have been condemned. However, opposition is mounting and political rhetoric runs the risk of legitimising it.

According to the iReport, a bi-monthly summary of racist activity compiled by the European Network Against Racism Ireland, five politicians were reported for racist speech in the second half of 2017, the latest data available. However, of those who reported racist experiences, it noted that almost half were Irish citizens, while just two reports came from asylum seekers.

There were also 113 reports about racist hate speech online, specifically Facebook, Twitter and YouTube. This came at a time of rising concern about a fringe “alt-right” presence in Ireland, seeking to shape the immigration debate according to its own extreme perspective.

The alt-right agenda has also begun to make its presence known during recent asylum accommodation protests and has been called out by politicians.

In March, a meeting in Lismore, Co Waterford – organised to help a Syrian refugee family – was attended by far-right agitators, according to its organisers who said they noticed the potential for agitation in advance on social media.

“It was getting quite tense. They were trying to provoke us and we refused to be provoked,” one of the meeting’s organisers said afterwards. “There was shouting that you’re going to be raped or killed on the street.”

These recent actions contradict a general belief that Ireland has been free of the sort of far-right presence that has taken a renewed foothold in other western democracies in recent years.

The question is, why the change?

In the Attitudes to Diversity in Ireland report last year, the Irish Human Rights and Equality Commission, and Economic and Social Research Institute noted public views on the impact of immigration tend to go up and down with economic conditions.

Irish people are more negative than the average of 10 countries analysed about Muslim immigrants, but attitudes here are “not quite as hostile” as in Finland, Portugal or a range of east European countries, it said.

Crucial to the whole debate on hostility are the views of immigrants themselves.

The Movement of Asylum Seekers in Ireland (Masi) and the Anti-Racism Network in January published a report, Attacks on Direct Provision Centres. It said Ireland “is not immune to the currents of anti-migrant racism that have been spreading and gaining power across the globe”.

Arson attacks on proposed centres are causing anxiety among residents in other areas who fear they may be targeted.

“It’s interesting to notice the fact that people are talking about these issues that affect us but they don’t really include us,” says Lucky Kahmbule, Masi spokesman, who rejects the idea the local protests are over the conditions of direct provision.

O’Doherty and Waters ordered to pay legal costs of case against State over Covid-19 laws 10:20
Simon Harris tests negative for Covid-19 after waiting three days for result 08:45
Search continues in Drogheda for young boy believed to have fallen into River Boyne 08:39
Ireland has higher per capita death ratio than US, study finds 07:54
Nursing homes dispute accuracy of HSE data on Covid-19 deaths 05:55