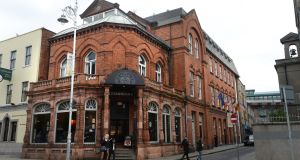 Avalon House hostel on the corner of Aungier Street is to be turned into a homeless hostel for single men. Photograph: Dara Mac Dónaill / The Irish Times

About 100 people attended a public meeting in Dublin city centre on Wednesday at which the vast majority opposed the opening of what would be the State’s largest homeless hostel for single adults.

The Peter McVerry Trust and the Dublin Region Homeless Executive (DRHE) intend to take over Avalon House, a Victorian building off Aungier Street, to provide emergency accommodation for 155 homeless adults.

The premises is currently occupied by a branch of Starbucks cafe and a backpackers’ hostel.

A lease on the building has been signed by the trust, and the hostel is due to open in January. However, local businesses have said they will seek a High Court injunction to stop it going ahead.

Wednesday’s meeting, which was at times heated, heard from several members of the local community as well as Dublin city councillor Mannix Flynn. Almost all those who spoke were against the proposal.

Mr Flynn said he was “appalled by the betrayal” of Dublin City Council and said the area was in danger of becoming “saturated”.

A proposal tabled at the meeting to ask those behind the plan to ensure the facility would cater for families rather than single adults was rejected.

The scheduled two hour meeting, which took place in a boxing club on nearby Cuffe Street, was cut short after about an hour when those in attendance decided to march to Avalon House to stage a protest.

The group entered the reception area where Mr Flynn delivered a statement to staff.

“We don’t want the emotion of homelessness used to blackmail us,” he said. “That’s our statement. We come in peace.”

“We’ll get a commitment from those people that this won’t happen,” Mr Flynn told the crowd before it dispersed.

The 155-bed facility is to be used to consolidate four existing Peter McVerry services which have a total of 70 beds. Another 85 beds are to be provided as part of the DRHE’s “cold weather strategy” to take rough sleepers off the streets during the winter.

However, it is understood the beds will be retained after the winter season for “supported temporary accommodation” where homeless people generally stay for up to six months while more permanent housing is sought for them.