Fourteen councils yet to spend any Traveller accommodation funds this year 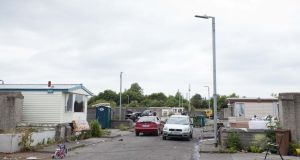 A file image of a halting site on the Cappagh Road in Finglas, Dublin. Less than one third of funds allocated for Traveller accommodation this year had been spent by the end of last month. File photograph: Tom Honan/The Irish Times.

Less than one third of funds allocated for Traveller accommodation this year had been spent by the end of last month with 14 local authorities failing to spend any of their Traveller housing budget, unpublished figures show.

Of the €13 million allocated for Traveller-specific accommodation by the Department of Housing this year, just €4.08 million has been spent.

The 70 per cent under-spend is greater than that recorded last year or 2017, when the rates were 48 per cent and 45 per cent respectively.

Sinn Féin’s housing spokesman Eoin Ó Broin, to whom the figures were released, said it was “totally unacceptable” that this year was on track to have the “greatest under-spend [on Traveller accommodation]” since he started tracking the issue.

The figures show that just four local authorities - Carlow, Cavan, Kilkenny and Meath - spent all of their allocations or more this year.

The number of Traveller families living on unauthorised sites by the sides of roads increased from 536 in 2016 to 585 in 2017 to 591 last year. In most cases these families are living without basic facilities such as running water, toilets or secure electricity supplies.

A total of 927 families were living in overcrowded housing - ie sharing - last year, bringing the total in either unsafe or overcrowded conditions to 1,518 families - 13 per cent of all Traveller families.

The not-yet finalised figures from the Department of Housing’s annual Traveller count indicate there are 11,020 Traveller families in the State.

Mr Ó Broin said the continued failure of local authorities to tackle the housing crisis facing the Traveller community, despite having the funds to do so, underlined the need for Minister of State Damien English to implement an expert report published in July.

The Traveller Accommodation Expert Review said settled residents should lose the right to object to Traveller accommodation and local authority managers should be “encouraged” to use emergency powers to force through Traveller housing plans.

Mr English in March said he would implement the findings of the report, compiled by three experts on housing, Travellers and human rights. It also called for the establishment of a National Traveller Accommodation Authority to replace the current national consultative body.