In 20 years, Direct Provision has cost Ireland €1.3bn: Is there a better alternative? 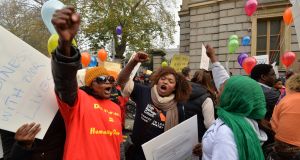 The Government has indicated it will consider all options, including the use of State land for purpose-built models. Photograph: Alan Betson

In almost 20 years, the State has spent more than €1.3 billion on accommodation of asylum seekers, the vast majority going to private providers.

This year, officials estimate the bill could exceed €120 million – which would be the first time annual expenditure breaches the €100 million mark. Emergency accommodation, only ever meant as a stop-gap measure, is now costing €500,000 a week.

It’s not like the Government couldn’t see this coming. Over the past two decades, ideas have come and gone from floating hotels and canvas tents to the construction of purpose-built facilities on State-owned land. But now there are aggravating factors. A broader housing crisis means even as applicants succeed in securing refugee status, they are stuck in centres, while more people arrive to take their place.

At the same time, Government efforts to find new direct provision centres and emergency accommodation have met with increasingly determined local opposition. While an interdepartmental group has been set up to examine the issues, the problems are clear.

“Direct provision is entering a new phase in its history,” a Department of Justice spending review stated earlier this year.

“In September, 2018, for the first time, RIA [the Reception and Integration Agency] did not have sufficient capacity to meet the demands . . . and has been steadily increasing its use of emergency bed accommodation.”

Back in 2000, just as direct provision was about to emerge, former justice minister John O’Donoghue issued his policy statement acknowledging the urgent need to find accommodation.

As O’Donoghue addressed the problem, official forecasts put the number of additional required spaces that year at about 8,000.

In hindsight, the future of Ireland’s struggle was cast in those few words. The State never built its own accommodation at the rate envisaged and instead opted heavily for private-sector supply.

This would bring mounting costs, while the exploration of alternative options would spark further social and political debate.

Thousands of places were promised in prefabs, hotels, guesthouses, hostels, mobile homes and even “flotels”, or floating hotel centres, by way of State acquisition and public advertising for private provision. A simultaneous policy of dispersal was adopted, to spread asylum seekers throughout the country.

“The problem with the Reception and Integration Agency is that any ideas of change that they have are extremely difficult to implement,” says Nick Henderson, chief executive of the Irish Refugee Council (IRC).

“Because they’re backed into a corner that is of their own making. Because of 20 years of not planning a system . . . there’s not enough ambition about how we provide accommodation to people. There’s a real risk that we constantly try to improve the system that, at its heart, is fundamentally wrong.”

Rising costs, community opposition and an increasing number of asylum seekers means the future direction of accommodation is unclear

Alternatives have never been seriously considered. There was a long held political and State belief that direct provision of accommodation, services and small supplementary payments was the only acceptable approach.

Some early accommodation plans met fierce opposition. A detention centre model similar to Australia at one point had to be ruled out by government.

“Flotels” were equally controversial. Sinn Féin councillor Larry O’Toole likened them to prison ships, and they provoked tensions in government.

The idea was “never a runner” said one cabinet minister of the time, adding that O’Donoghue “was told in no uncertain terms, absolutely not”.

In those early days, officials visited Newfoundland in Canada to inspect prefabs, or “pods”, some 400 of which were at one stage earmarked for Dublin Airport.

Ultimately, as State-owned options failed to materialise on any significant scale, private suppliers began to reap the profits from a humanitarian project.

“We’ve made some people incredibly rich,” says Independents 4 Change MEP Clare Daly in a reference to the investment in private accommodation provision. “We’ve failed to realise the benefits for Irish society of integrating these people.”

Millions of euro in contracts have changed hands. In 2004 alone, just a few years in, €83 million was spent on commercial management firms, catering companies, hotels and ancillary services.

By 2010, half way through the lifetime of direct provision, the State had paid €655.5 million to private firms.

Figures obtained from the Department of Justice show that between 2001 and 2018 the State paid out €1.36 billion in accommodation expenditure against initial allocations of €1.15 billion, a difference of €210 million or an average of €11 million a year.

Its 2019 spending review found that in just three of 15 years (2004 to 2018) accommodation spending remained within spending estimates. “This indicates that it is very difficult to predict the level of expenditure,” it said.

A further breakdown shows commercial contract spending far outweighed State-owned accommodation spending every year between 2011 and 2017. In 2011, €58 million was spent on private provision compared to €8 million on State facilities.

However, 2010 marked a major policy shift following a value-for-money review by the department. The State said it would move several hundred asylum seekers to new centres over an 18-month period because it had been paying too much for services.

This was put down to a lack of fully open tender competitions and too much excess capacity. Between 2002 and 2008, it found, direct provision had cost €581 million with an average of 15 per cent extra capacity, a reduction of which would save millions.

While the numbers of centres were reduced between 2008 and 2014, the department subsequently carried out four advertising campaigns looking for short- to medium-term accommodation options between 2015 and 2018. Emergency options were sought last summer.

Today, rising costs, community opposition, and an increasing number of asylum seekers means the future direction of accommodation provision is unclear and problematic.

The Department of Justice has also noted that recent suspected arson attacks at proposed centres had probably affected “market interest” and insurance costs.

The Government has indicated it will consider all options, including the use of State land for purpose-built models – the type of approach first sounded, but never delivered, by O’Donoghue two decades ago.

UCD academic and direct provision researcher Dr Liam Thornton, believes those awaiting the processing of applications should be integrated into society and the social welfare system, something that had been historically contentious. Government estimates put the likely annual cost of a social welfare-based approach at €66 million, compared to 2018 direct provision costs of €78 million, although further research is required.

Former High Court judge Justice Bryan McMahon says whatever happens the use of emergency accommodation has been “scandalous”.

“My solution would be that the State would have to build direct provision centres. They have the land and they’re in the best position to build them,” he said. “It doesn’t make economic sense for hotels to go to direct provision any more.”

This year’s Department of Justice spending review says a system of State- owned facilities would be considerably cheaper (about 44 per cent cheaper) than private leases but with the caveat of substantial, front-loaded capital funding. In an era of housing shortages, such a policy threatens to be politically toxic.