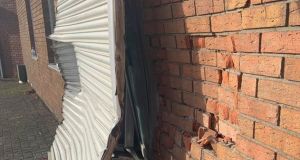 Burglars rammed the front of the Deansrath Family Centre in Clondalkin, shortly before children arrived for their breakfast

More than 120 families, including young children being fed before school, have been left in limbo following a botched raid on a community centre this week.

Burglars rammed the front of the Deansrath Family Centre in the west Dublin suburb of Clondalkin on Monday morning, shortly before children arrived for their regular breakfast.

While nothing was taken from the facility, severe structural damage was caused and it was immediately deemed unsafe and shut down.

The centre provides morning and evening meals for local children and those with physical and intellectual disabilities, as well as a range of family and therapy services. It survives on various State and self-raised funding.

While efforts are ongoing to find alternative facilities for some of its services, the ability to feed children at another site is virtually impossible due to strict regulations.

At about 7.30am on Monday morning a flatbed truck reversed at speed into the premises, apparently in a bid to break through the entrance. When men got out of the truck they were scared off by a cleaner who then contacted gardaí.

CCTV footage of the incident is being inspected but staff are at a loss to understand why the premises was targeted given the lack of valuables kept inside.

“We wouldn’t even have a TV,” said chief executive Siobhan Feehan. “The laptops we have are 10 years old and are used for CoderDojo [a children’s computer programming workshop].”

Structural engineers immediately closed the premises and nobody has been allowed inside since. It is unlikely the structure will be repaired, given the centre was already in need of a new home. Between 120 and 130 families visit the drop-in “safe space” every day.

Ms Feehan said the most pressing concern was how to replace the meal services for children aged between one and five who depend on it in the mornings and evenings. Many of those children began to arrive on Monday morning not long after the attempted ram-raid.

“We could hear, inside, the crying outside,” she said, explaining that even if alternative premises were offered there were significant obstacles.

“Pre-school regulations are very tight in order to make it compliant and that adds a whole extra difficulty to everything.”

Among a list of standards, premises must have a certain amount of square footage and toilet facilities per child, heating systems must be child-proofed, an intercom system is required and meal preparation is subject to strict health inspections.

Ms Feehan said staff are “coping one day at a time” and attempting to relocate other services before meeting officials about potential future options for the centre overall.

Gardaí said significant damage was caused to the building. No arrests have been made and investigations are ongoing.