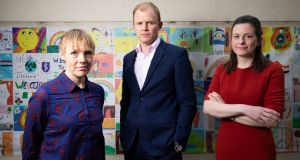 Heidi Holden, Nick Henderson and Katie Mannion of the Irish Refugee Council. ‘It is not easy to spend a whole day immersing yourself in a story of persecution and suffering,’ says Ms Holden, a case worker. Photograph: Tom Honan

The Irish Refugee Council (IRC) is seeking funding to offer supports to workers dealing with the traumatic experiences of asylum seekers arriving in Ireland.

As part of the asylum process, applicants must fill out detailed forms and undergo interviews outlining what they encountered in their country of origin – often harrowing accounts of torture and physical violence including rape.

Solicitors and other practitioners who deal with processing cases can be exposed to harrowing details on ongoing basis.

“Hearing and working with people who have experienced torture or serious harm, there are most definitely issues of vicarious trauma,” said Nick Henderson, IRC chief executive.

“There are most certainly issues that you can take away from your work.”

Unlike other practitioners in the asylum area, the IRC encourages asylum applicants to set out detailed personal statements about their experiences, a process that can take considerable time.

The organisation is now examining funding avenues that might help it establish a type of employee-assistance programme.

The issue of providing psychological supports for practitioners exposed to trauma is a relatively new one.

Earlier this year it emerged that almost 60 per cent of legal staff in the office of the Director of Public Prosecutions (DPP) were suffering medium to high levels of trauma due to the distressing nature of their work.

Nearly one-fifth “frequently or very often” used medicines or nonprescription medicines to cope with stress and a similar proportion relied on alcohol.

“It is not easy to spend a whole day immersing yourself in a story of persecution and suffering,” said Heidi Holden, an IRC case worker who has taken more than 30 detailed personal statements. She described the “bleak” nature of their content and the inevitability of carrying “many stories of persecution inside our heads”.

One recent case that stands out for Mr Holden was that of a west African man who witnessed his parents and siblings shot dead by state forces. Details of the case are kept confidential in order to protect his identity.

“To additionally need to explain that he was tortured seemed unnecessary to him,” she recalled. “He was so embarrassed to explain how those in his group were forced to hop like frogs and beat each other – it sounded ludicrous and he was ashamed. He also wanted to protect me by not exposing me to his torture.”

The man, who was targeted due to his political activism, is now in the State’s direct provision system awaiting the outcome of his case.

Clients, Ms Holden explained, often require a lot of encouragement to give the full detail of persecution experiences, especially those involving rape and torture.

“Assessing credibility is a vital part of the international protection decision-making process,” she said. “It is important that a person seeking international protection provides sufficient and specific detail such as to indicate a genuine personal experience. So although a woman may have described years of abuse, it is still necessary to inquire further.”

Legal staff assisting in some of the more distressing cases of asylum are not restricted to the IRC – many cases are processed by solicitors through free legal aid.

The Law Society is cognisant of the need to promote psychological wellbeing among its members generally and offers access to external support services for those suffering as a result of their work.

“We don’t pretend that we have the psychological expertise here within this organisation to deal with that but we provide access to the type of support [solicitors] may need,” said director general Ken Murphy.