Hundreds of families queue for nappies and infant milk

Capuchin Day Centre: ‘We have this every week. People come from all over Dublin’

Every Monday hundreds of parents queue with their babies and small children to get nappies and baby food from the Capuchin Day Centre on Dublin's Bow Street. Video: Bryan O'Brien / Report: Kitty Holland 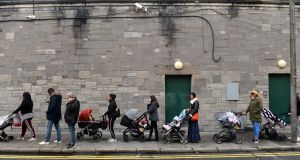 Hundreds of mothers and babies, many of them homeless, queue at the Capuchin Day Centre in Dublin on Monday for nappies and infant formula milk.

From 9am about 300 families begin gathering outside the centre, which also serves free meals daily, to see manager of family services Ricardo Fronz.

By 11 am, the line of adults with young children and infants in buggies stretches halfway down Bow Street.

Inside, Fronz has a list of the more than 600 families registered and greets parents warmly. He asks after the baby or babies and checks whether their need is the same as last time they were there.

Behind him, a store room holds nappies as well as shelves of baby formula of different brands. They also keep baby toiletries and babygrows; the centre buys these supplies from wholesalers.

“It started in 2016 in the corner of the dining room when we noticed some of the mothers didn’t have nappies to change their babies,” says Fronz. “We started keeping a few nappies to give them. A few nappies became a few packets of nappies and soon mothers were coming just to get the nappies.

“So now we have this every week. People come from all over Dublin. We even have some who are from Dublin, but are in hotels in Drogheda and Dundalk. It is very hard for the families in homeless accommodation.”

Mothers and babies queuing for nappies and baby formula at Capuchin Day Centre this morning...recovery? For some maybe pic.twitter.com/sNl8eqaQJO

To register, the parent or guardian must bring their infant with their birth certificate and their own identification. Only they may collect baby supplies and must show their ID if asked. In most cases, however, Fronz recognises them, greeting many by name.

Carol-Ann Byrne (27) is there with her son Carson (14 months). From Sheriff Street in Dublin’s north inner city, she has been homeless for two years. She and her son are in a B&B on Gardiner Street.

“I was renting a little house in East Wall but the landlord put it up for sale and I haven’t been able to get anywhere since. This is a great service,” she says. “ I get a box of food and nappies and that does me for the week.”

Patrick Collins (21) from Drimnagh and his partner Kelly-Ann Rooney (20) from Oliver Bond Street are there with four-month-old Maggie. They are staying in a box room in Patrick’s two-bedroom family home.

“It’s overcrowded,” says Kelly-Ann. “We’re trying to find a place but it’s impossible because they all want a landlord’s reference, but we’ve never rented so we don’t have any. Between nappies and baby milk, that would be almost €40. This really helps.”

Living in a hotel

Romana Vasil (20), from Romania, is with her children Alex (six months) and Betty (18 months). “It is a very good help with the nappies and the milk,” she says.

She and her boyfriend and their three children – an older child is at school – are homeless, she says. “We are in a hotel,” she smiles. “It is hard. But it is okay because it is not outdoors.”

About half of those who speak to the Irish Times are homeless. About half are Irish, with others from eastern Europe, Africa, Iran and Syria – and most are mothers.

There are several fathers and couples and a number of grandparents.

Michael Doyle (60) from Bluebell is collecting nappies and formula for his two-year-old granddaughter, Tia. “I call her Tia Maria, ” he laughs. “I’m just helping my daughter. I come here every week. You have to be there for your kids when they need you and I want to be there for my grandchildren.”