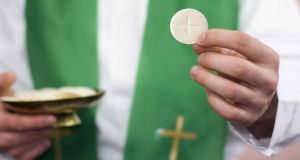 Priests are taken ‘out of ministry’, meaning they cannot celebrate Mass or other sacraments, when they are facing statutory or canonical investigations into abuse allegations made against them. Photograph: iStock

An Australian bishop refused to inform an Irish diocese about a priest suspended from ministry who was travelling to the diocese, correspondence from the National Board for Safeguarding Children in the Catholic Church (NBSCCC) to the Department of Justice shows.

Documents released under the Freeedom of Information Acts show the issue was brought to the attention of the board’s chief executive, Teresa Devlin, during her appearance before the Royal Commission into abuse in Australia, in February 2017.

Ms Devlin “was approached by parents of children abused in Australia who had alerted our office to a priest out of ministry visiting Ireland”, a letter from the board to the Department of Justice said.

“The parents had asked the relevant bishop in Australia to inform dioceses in Ireland but he refused,” it said. The national board advised the local diocese and the “priest was refused permission to minister”, the letter said.

The board declined to disclose the name of the bishop to The Irish Times, stating data protection concerns.

The correspondence from the NBSCCC to the department shows there have been several cases of priests suspended from ministry pending investigations into sexual abuse allegations, who have continued practising in Ireland over recent years.

Priests are taken “out of ministry”, meaning they cannot celebrate Mass or other sacraments, when they are facing statutory or canonical investigations into abuse allegations made against them.

In one case, a suspended priest who was “not in good standing” was conducting a healing ministry around the country without permission. When the State child protection watchdog Tusla was informed, the agency advised, “it was not a priority for them”, the NBSCCC told the Department of Justice.

Church authorities notified all dioceses that the priest should not be allowed to minister “in order to safeguard children”, the board said.

The correspondence detailing recent cases of suspended priests practising in Ireland was sent to the Department of Justice, by the church safeguarding board in September last year and listed incidents from February 2014 to February 2017.

“Information about two priests out of ministry who were presenting in a number of dioceses in Ireland and saying Mass were brought to the attention of the national board,” the letter said.

In another case, a diocese sought advice from the board about a “priest out of ministry travelling with a choir”, and outlined the allegations against the priest.

The board advised the diocese, and “ensured that the best interests of children were prioritised over the respondent priest’s desire to travel with the choir”.

A spokesman for the board said it was not aware of any current cases where out-of-ministry priests were active.

The correspondence was part of an ongoing dispute between the church safeguarding watchdog and the department. The board, set up by the Roman Catholic Church in Ireland, provides advice, services and assistance in the safeguarding of children. It has repeatedly asked the department to introduce regulations to give the body legal powers to hold a central database of priests facing child abuse allegations.

Currently, some dioceses and orders are not sharing identifying information about alleged abusers with the board, or between each other, citing data protection concerns. The current situation could have potentially “devastating consequences for children”, the board has previously warned.