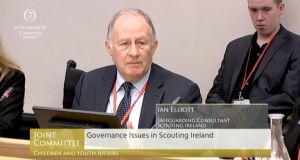 Safeguarding expert Ian Elliott, who has been conducting the review into past abuse in the Scouting Ireland, said he expected the number of known victims to increase ‘quite considerably’.

A historic review of Scouting Ireland’s records has uncovered evidence of 108 alleged child sex abuse victims, and 71 alleged abusers believed to have preyed on children in the youth organisation.

The numbers of alleged abuse cases are from an audit of the organisation’s files, and from information provided by victims who have contacted Scouting Ireland in recent months.

Safeguarding expert Ian Elliott, who has been conducting the review into past abuse in the organisation, said he expected the number of known victims to increase “quite considerably”.

The revelations were disclosed by Minister for Children Katherine Zappone, and Scouting Ireland officials, at a meeting of the Oireachtas Committee on Children and Youth Affairs.

The review of past records is still ongoing, and abuse victims were contacting the organisation at an “increasing” rate, Mr Elliott told the committee.

Most cases related to incidents between the 1960s and 1980s, and the majority of alleged abusers are deceased.

The organisation has identified 14 alleged abusers who are thought may have abused multiple children.

Where alleged child abusers are still alive, Scouting Ireland has made reports to An Garda Síochána and the State child protection agency Tusla.

“None of the alleged abusers are still working with Scouting Ireland, ” Ms Zappone told the committee.

Aisling Kelly, chair of the organisation’s new board, said a “general compensation fund” was being explored, so abuse victims did not have to seek redress through the courts. The organisation was also putting together a victims policy for how to best respond to abuse survivors.

Ms Kelly said it was clear in past cases “neither the offenders nor the victims were always dealt with appropriately”.

“We cannot change the past, but we can make sure that this organisation is a safe environment for all our members now and into the future,” she said.

“Money has been ring-fenced in relation to giving the necessary supports to victims, so the victims are being funded in relation to counselling if that’s required,” she told the committee. Ms Kelly confirmed Scouting Ireland was currently facing several legal cases in relation to past child sex abuse.

The organisation has been embroiled in controversy since early this year, after The Irish Times revealed the handling of a rape allegation concerning two adult volunteers had been “deeply flawed”.

Twice Ms Zappone suspended the organisation’s State funding in recent months, over a lack of confidence in their governance following the scandal.

Four senior volunteers criticised in a review of how the rape allegation was handled have stepped aside from their roles, pending an ongoing barrister’s review into the case.

The entire board of the organisation was replaced last month. Following this, Ms Zappone decided to provisionally reinstate public funding up until next April.

“I think it is a terrible thing that victims have carried this burden for many years. We will work with them, we will find the resources,” he told the committee.

Ms Zappone said the extent of past abuse was “deeply distressing”, and she would continue to liaise with Scouting Ireland “as a matter of urgency”.

Fianna Fáil children’s spokeswoman Anne Rabbitte TD said in recent months the “lid not only came off, it was blown off Scouting Ireland”, exposing the need for “dramatic” governance and cultural changes.

Maeve Lewis, executive director of abuse survivors charity One in Four, said the number of identified past abuse cases was astonishing.

“It is very distressing to think that such a high number of sex offenders were able to gain access to children through an organisation that had been trusted by generations of parents,” she said.