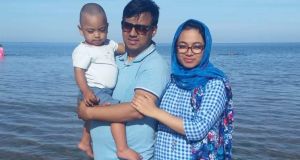 An accountant living in Cork, who is originally from Bangladesh, has called on the Government to reconsider its refusal of a visitor visa for his mother-in-law who planned to come to Ireland to help care for her sick grandchild.

Mohammed Delowar applied for an Irish visa for his wife’s mother after discovering that his one-year-old son needed to undergo surgery. *

His wife Sumaia Rashid Samanta, who is due her second child in mid-December, has suffered complications during the pregnancy since developing diabetes mellitus. The couple decided to apply for Ms Samanta’s mother Salma Rashid to visit from Bangladesh following their son’s surgery so she could help with his care once the new baby arrives.

However, the couple received word from the Irish embassy in Delhi in mid-October that their application had been refused because of a failure to provide evidence of sufficient finances. Other grounds for refusal were that Ms Rashid had “insufficient social, economic or professional ties” in Bangladesh and thus was at risk of outstaying her visa.

Mr Delowar and his wife appealed the decision, offering evidence of the €26,000 he said was in Ms Rashid’s bank account. They also argued that she was happily married and had a 15-year-old son that she needed to return to in Bangladesh.

In a letter to the visa officer in New Delhi (which also deals with visa requests for Bangladesh), Mr Delowar reiterated that his mother-in-law’s visit was to provide “support for my son’s medical condition and my wife who is due to give birth at the same time”.

He also provided a letter from the family’s GP, who expressed her “grave” concern at the visa rejection, and a letter from Cork University Maternity Hospital underlining the medical complications Ms Samanta had suffered during her pregnancy.

“I guarantee that she will return to Bangladesh within the defined time limit,” wrote Mr Delowar. “She will not be financial liability to Ireland public funds.”

The embassy official responded on November 12th, four days before the boy’s surgery, rejecting the appeal. The officer acknowledged the letters submitted by medical professionals, and the date of the boy’s surgery, but reiterated that there was a “real risk” the applicant would overstay her visa to care for her daughter and grandchildren. The officer also requested more clarity around where the lump sum in the mother-in-law’s bank account had come from.

Mr Delowar told The Irish Times he had explained to the officer that the money was a combination of his own savings and his father-in-law’s earnings. Speaking over the phone from a waiting room in our Lady’s Children’s Hospital in Crumlin last week while his son underwent five hours of surgery, Mr Delowar said they had hoped Ms Rashid could arrive the day of the surgery.

“I have a very good relationship with my employer but I may end up having to leave my job now to look after my family. What will happen then? I’ll end up on the, what do you call it, the dole. That’s not good for me or the Irish Government. My wife is saying now that we made a big mistake moving to Ireland. She saw people walking down the road with a dog the other day and said she felt like the dog is treated better than our family.”

The Irish embassy in India has recommended that Mr Delowar submit a new request for Ms Rashid to visit.

Asked to comment on the situation, a spokesman for the Department of Justice said they would not comment on individual cases. He said all applications for visas were considered “on their individual merits” and that 90 per cent of short stay visa applications worldwide were granted in 2017.

He said the Irish Naturalisation and Immigration Service (INIS) gave priority to urgent cases and that Mr Delowar’s circumstances “would merit any fresh application to be examined immediately”.