Thinking Anew – A kingdom that is not of this world 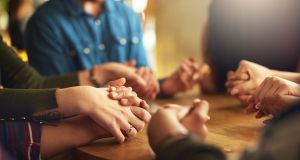 “The Kingdom of God is peopled by a people who have set themselves apart obedient to another law, that of love God and love your neighbour as yourself.” Photograph: Cecilie Arcurs/iStock

We tend to think in hierarchies, but calling Christ a king does not make a vulgar monarch of the Prince of Peace. He told us so himself. Standing before Pontius Pilate, the prisoner Jesus stated flatly that his kingdom was not of this world. Earlier, he had advised his followers not to lord it over each other the way kingdoms of this world do.

Throughout his life he regularly spoke of the “Kingdom of God” so Jesus was comfortable with the word; although not as we experience kings here on earth. We are a chosen race, a royal priesthood, a people set apart invited to share in his glory rather than being cowed before him.

The kingship of Christ has inspired many of our greatest mystics and poets with the idea of an inverted kingdom that remains a kingdom but not one of this world.

Unlike the kingdoms of this world, where the people are subjected in obedience to a lord, the Kingdom of God is peopled by a people who have set themselves apart obedient to another law, that of love God and love your neighbour as yourself.

More like a republic than a kingdom, the subjects of this kingdom choose their ruler daily.

From the moment they rise to the end of the day they are constantly opting to be part of the tribe.

They face every question obedient to that law and, much more often than not, decide to subject themselves to the command to love.

Of course it is not a kingdom of this world. Our world is a broken place with plenty of people who want to break it a bit more.

Fear, violence, threat and division are as real for us as they were for every generation and society before us. They are like monsters that destroy and then sleep until we forget what they were capable of doing before bursting forth again when we thought we had outgrown them. If we are fortunate enough to live and die during one of these lulls we are lucky.

Very few humans lived charmed lives without experiencing the brutality of which we are ever capable. There are always people who try to waken these monsters and the kingdoms of the earth rise up to crush each other or even some of the people within them.

Ours is not a kingdom of this world; we are a people set apart.

The sacrifice of their priesthood is the willingness to consider the other person and honour the needs, esteem and life of the other and treat them as an equal.

Sacrificing greed is the noble sacrifice of a shared priesthood that is worthy of the description royal. We talk too much of the things that are wrong and forget the overwhelming power of Christ’s inverted kingdom. As naturally as we can say yes to something good, we can say no to something bad.

Both are equally good and, if you are subject of Christ, the grey areas have a subjective test to help you tell the difference: if anybody has to suffer as a result of an action or word, would I be happy to be that person? If the answer is no, then saying no is the coronation of anybody who is motivated by doing good, who chooses to follow the law to love and be of a kingdom that is not of this world and thinking subjectively of the cost of harm.