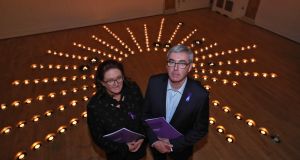 Suzanna Cawley and Chris Cawley, sister and brother of Celine Cawley who was killed by her husband 10 years ago attended the launch of Women’s Aid Femicide Watch Report 2018 in Dublin File photograph: Colin Keegan, Collins Dublin.

The siblings of Celine Cawley, who was killed by her husband Eamonn Lillis in their home in Howth, Co Dublin, have called for legal reforms that would prevent those who kill their partners retaining joint assets afterwards.

Celine Cawley was 46 years old when she was killed in 2008. She had been a successful businesswoman who ran a television production company.

Her brother and sister, Chris and Susanna Cawley, were involved in a protracted legal dispute with her killer, over control of the joint assets held by the couple.

Speaking at domestic abuse charity Women’s Aid conference on Femicide, Susanna Cawley said “our case was about securing financial security and a future for Celine’s daughter”.

“In our case the killer decided that he was entitled to retain full ownership of all the assets which had been owned jointly with Celine, the family home in Howth and a home they owned in France together,” Chris said.

The legal fight was a “complex and emotionally draining process which continues today”, he said.

The siblings called for legislation to be introduced so that an individual with joint-assets would be prevented from financially benefiting from the assets if they killed the other joint owner.

In recent weeks, Fianna Fáil justice spokesman Jim O’Callaghan submitted a Private Members Bill in the Dáil to address the legal loophole around inheritance and joint-assets, based on the difficulties highlighted by the Cawley’s case.

Minister for Justice Charlie Flanagan decided not to oppose the legislation, but plans to submit some amendments at committee stage, based on advice from the Attorney General, according to his spokeswoman.

“We wonder how many femicide victim’s families are out there today trying to get on with their lives in the knowledge that the man who killed their mother, their sister, their daughter, is going to walk out of jail some day and settle back into the family home as if nothing had happened,” Susanna told the conference.

The Women’s Aid conference coincided with the launch of their Femicide Watch 2018 report, which found seven women had died violently this year.

Chris Cawley said media reporting of the gruesome killing was also an invasive experience for the family.

“Our world had been turned upside down. It was a living nightmare as grim forensic details unfolded before our eyes,” he said.

“I identified Celine’s body for the investigating gardaí a few hours after she had been beaten over the head repeatedly with a brick,” he said, becoming emotional. “I know the macabre, bone chilling details of how she died.”

Speaking at the conference, Garda Commissioner Drew Harris said An Garda Síochána were drawing up a risk assessment model to better evaluate incidents or threats of domestic abuse.

More than half of women killed in Ireland were killed by a current or ex-partner or husband, according to a review by Women’s Aid of female homicides over the last three decades.

Nine out of 10 women killed were killed by a man known to them, with 23 of the 225 killed by a stranger.

Some 137 women (61 per cent) were killed in their own homes, and in the 20 cases where a woman was killed by a relative, 16 were killed by their sons.

Women’s Aid called for the introduction of formal reviews of domestic killings “as a matter of urgency to help protect women and children and save lives”.

The charity said automatic reviews in the aftermath of domestic killings to understand what occurred, would help improve State agencies prevention of future cases where women were at risk in the domestic environment.