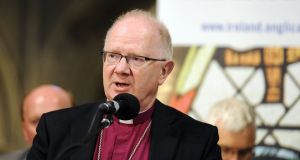 Church of Ireland Archbishop of Armagh, the Most Reverend Dr Richard Clarke is among signatories to a letter on Brexit from churches across the island of Ireland. File photograph: Dave Meehan

The leaders of the main churches in Ireland have urged public representatives to “weigh their words carefully” and respect the views of people on both sides of the Brexit debate.

British Prime Minister Theresa May is to hold further Brexit talks in Brussels on Saturday, hours before a special summit is scheduled to sign off on the European Union withdrawal agreement.

The political declaration is expected to include language on Northern Ireland and the Border that will reflect Mrs May’s promise to explore technological solutions as an alternative to the backstop.

Taoiseach Leo Varadkar expressed hope in the Dáil on Wednesday that European Union leaders will sign off on the agreement.

In a joint statement issued by the main churches on Wednesday night, leaders said “relationships between the people of this island, both North and South, and between the Republic of Ireland and the United Kingdom, have improved and deepened immeasurably over the past thirty or so years”.

“This atmosphere of mutual respect, understanding and growing friendship has been the positive background against which many significant developments have taken place — ceasefires, political accommodation, increased connectedness and rising prosperity for many.

The leaders said they pray that the inevitable tensions, which the Brexit negotiations will entail will not be allowed to undermine the quality of relationships between negotiators.

“In this context, we particularly want to encourage public representatives, and all others who give leadership in our society, to weigh their words carefully, to respect the integrity of those who conscientiously differ from them and to speak with grace,” the statement said.

“Regardless of the outcome of this process, as peoples and communities who share this island, we will remain closely related and will have to both get along together and work together in this changing and somewhat uncertain world that lies ahead.”

“This calling will be helped immensely as we all strive to listen and relate to one another in the context of mutual respect and even growing trust, rather in a divisive and unhealthy atmosphere of needlessly destructive debate and broken and fractured relationships,” it added.