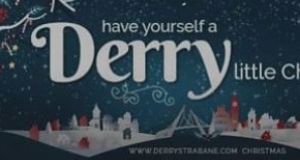 DUP councillor David Ramsey said it was important everyone was made to feel welcome in the city.

A Christmas billboard has been removed in Derry as it did not feature the name ‘Londonderry’.

The poster with the slogan “Have yourself a Derry little Christmas” was erected in the Waterside area of the city.

However it was removed after some council members on Derry City and Strabane District Council said the branding should also include the word ‘Londonderry’.

A spokesman for Derry City and Strabane District Council told The Irish Times the aim of the campaign is to “positively promote the retail offering and Christmas programming” in the city and district over the Christmas shopping period.

“This year’s campaign intended to engage visitors with a catchy slogan using wordplay in the tagline ‘Have yourself a very Derry Christmas’.

“However, it has since been highlighted by some council members that this may not be considered inclusive by all members of the community and as such has been amended in some campaign branding.”

The spokesman said the council received no complaints from the public about the advertising.

He said the billboard which was changed was due to change anyway as the campaign was rolled out, so there was no additional cost to the council.

DUP councillor David Ramsey told BBC Northern Ireland it was important everyone was made to feel welcome in the city.

“This city is well known for being inclusive and it is important, especially at Christmas, that inclusivity is at the forefront of our marketing,” he said.

“Perhaps it is a case of a marketing company trying to be witty in their branding, but not being sure of the bigger picture around the city’s name.”