Housing crisis: ‘The system has totally failed me’ 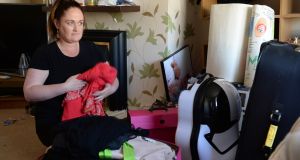 Carol McNulty packing up at her rented home in Dublin, as she is facing homelessness. Photograph: Dara Mac Dónaill

Carol McNulty (33) and her daughter Molly (7) are facing homelessness for the second time in a little over two years.

They had been homeless 10 months when they found a small house in Donnycarney, Dublin, in March 2016.

Carol qualified for the Homeless Housing Assistance Payment (HHAP), which meant she could pay a higher rent than allowed for under the regular HAP rent support scheme.

“I was told by Dublin City Council this would be a long-term lease, that the landlord had the house as an investment. I put curtains up, got new carpets, made it our home. But just a few months ago, the landlord said he was selling up. I got a notice to quit, to be out by June 27th. The HHAP has totally failed me.”

Carol works as a carer on a low-hours contract. Her working week can vary from 10 to 30 hours. Molly goes to the local Our Lady of Consolation national school.

Carol does not drive and so needs to stay close to where they now live.

“I have been looking for somewhere since we got the notice to quit, but as soon as you say HAP or that you have a kid, landlords don’t call you back.

“The council said there was a possibility of an apartment in Finglas. I don’t want to sound picky, but that would be two buses in the morning to get Molly to school and a third one for me then to get to work.

“I don’t want to move Molly out of her school. She’s thriving there and she’s had enough disruption. She’s very smart, she knows what’s happening. It is causing her anxiety.

“She asked me the other day, ‘I was homeless for my first day of school. Will I be homeless for my Holy Communion?’ I get on very well with her dad. I said to her, ‘You can stay with your dad while I sort things out’. And she says: ‘No, you won’t get a hotel if I’m not with you. Only adults with children get hotels.’ She’s that clued-in, worrying about me. I worry about her.”

Asked if she would accept another HHAP tenancy, she says she would if it could be guaranteed until Molly finished national school. “I just want to get her to finish her primary education in peace without this moving, moving, moving and homelessness.”