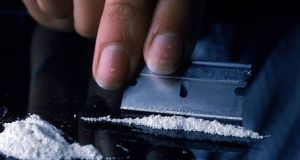 The proportion of females reporting cocaine as their main problem drug rose from 14% in 2010 to 23% in 2016. Photograph: Getty Images

Cocaine abuse is back at boom-time levels, a leading drug addiction expert has said.

Prof Colin O’Gara, consultant psychiatrist and head of addiction services at Saint John of God Hospital, said the numbers being treated for cocaine addiction were at 2007 levels.

“Back in 2007 we set up a service specifically for cocaine addiction at the hospital [St John of God]. When the economy went into freefall we saw cocaine being swapped for head shop drugs until legislation was tightened up and the prevalence of those drugs receded.

“Overall cocaine addiction went down in line with the economy, but it has been increasing steadily from 2013 to now. We are back at 2007 levels where cocaine abuse is very prevalent and is a very common presentation to acute services at St John of God.”

Figures from the Health Research Board published earlier this week show the number of people being treated for cocaine addiction is 60 per cent higher than it was three years ago.

“We would tend to see the severe presentations which would be people who are compulsive cocaine-users experiencing relationship, interpersonal and work problems due to their addiction,” he said.

“I would see individuals who use it on a daily basis in a very harmful fashion. It would escalate from relatively small levels taken socially at the weekend to significant intake on a daily basis as more is needed to get the high as they become dependent.”

Prof O’Gara said people who take the drug “socially” at the weekend while drinking alcohol were putting their health at serious risk.

“Cocaine and alcohol are now going hand in hand with people who use it socially on the weekend. Alcohol and cocaine combine to form a pharmacologically active compound called cocaethylene which is toxic to all organs but especially the heart. We often see patients who have a primary problem with alcohol but also use cocaine which they use as a stimulant to maintain an alcohol binge.”

Prof O’Gara said the issue was likely to worsen as the economy continued to recover. “The upturn in the economy certainly has impacted – it seems like upsurges in the economy translate into increased cocaine usage, and it looks to us like it’s back where it was during the boom.”