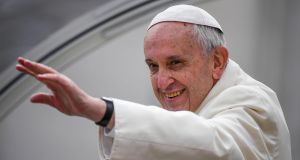 The Presbyterian Church in Ireland has agreed its moderator should meet Pope Francis during his two-day visit here in August. Photograph: Alessandro Di Meo/EPA

The Presbyterian Church in Ireland has agreed its moderator should meet Pope Francis when he visits Ireland in August, while it has also loosened ties with the Church of Scotland over the latter’s moves towards recognising same-sex marriage. For similar reasons it has also decided to loosen ties with the United Reformed Church.

Generally recognised as mother church of the Presbyterian Church in Ireland, the Church of Scotland has instructed officials to consider changes to its laws to allow its ministers preside at same-sex-marriage ceremonies.

At the Presbyterian General Assembly, which is meeting in Belfast this week, delegates voted to allow moderator Rev Dr Charles McMullen to meet the pope when he attends World Meeting of Families events in Dublin on August 25th and 26th next.

Traditionally the Presbyterian Church in Ireland, the largest Protestant denomination in Northern Ireland, has been most opposed to Catholicism and its leadership.

The vote “demonstrated that a majority of assembly members felt that both denominations have drifted far from biblical truth in relation to marriage, and were in fact ignoring the authority of scripture,” said assembly clerk Rev Trevor Gribben.

“Both are now moving towards a position where so-called same-sex marriage can be performed in the context of their worship services. Our church is very clear that marriage, as defined in God’s Word, is between one man and one woman and significantly it is God’s Word that is authoritative,” he said.

Meanwhile, the Republic’s Government has been urged by the assembly to keep to its promises that abortion will be rare in the State and that children with disabilities will not have their lives terminated.

The Presbyterian Church opposed repeal of the Eighth Amendment in the May 25th referendum. It has also voted to “strongly oppose any legislation which allows assisted suicide or euthanasia”.

Rev Dr Trevor Morrow, a former moderator and retired minister at Lucan, Co Dublin, said the recent referendum was seen by the majority of Irish men and women as the last expression of Irish Catholic social morality.

“In this context you must understand the voting and response to the referendum result. From the pro-choice movement’s perspective it was a celebration of being released from the shackles of the past,” he told the assembly in Belfast.

In a resolution the General Assembly expressed its sadness at the outcome of the referendum and called for “the best possible life-affirming care and support to be made available to women facing a pregnancy crisis”.

The Presbyterian Church in Ireland has more than 225,000 members, including 24,600 in the Republic. It had its origins in Scottish migrations to Ulster in the early 17th century.