Abortion in Northern Ireland: Where do the parties stand? 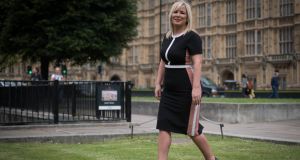 The law governing abortion in Northern Ireland dates back to the Offences Against the Person Act 1861 and the Criminal Justice Act (NI) 1945. They make abortion illegal in almost every circumstance.

The 1967 Abortion Act in Britain, allowing for abortion up to 24 weeks, was never extended to the North.

Access to abortion is only permitted if a woman’s life is at risk or if there is risk to her mental or physical health that is long term or permanent.

Pregnancy involving rape, incest and fatal foetal abnormality (FFA) are not circumstances in which abortions can be performed legally.

Thirteen abortions, within the current law, took place in Northern Ireland hospitals in 2016/17.

However, it is estimated that every day two or three women from Northern Ireland travel to Britain for an abortion, with many others risking prosecution for self-administering abortifacients or abortion pills.

The Irish Times asked parties to explain their current stance on the issue.

The DUP (which holds 28 seats at the Assembly) described itself as “a pro-life party”.

Politicians are whipped on the matter, all of its MLAs have always voted against abortion law reform in the past and will continue to do so, a spokeswoman said.

Sinn Féin (with 27 Assembly seats) will hold its next ard fheis in Belfast on June 15th/16th, where it is anticipated that party policy will change from support for abortion in cases of rape, incest and FFA to approval of abortion in line with Government plans after the referendum.

Party leader Mary Lou McDonald has said while everyone in the party was entitled to a position of conscience on abortion when it come to making law for society and formulating public policy elected representatives are bound to a “democratic, considered, collective position”.

“We have to legislate for all,” a spokesman said.

Speaking in London on Thursday, after the UK Supreme Court found the North’s abortion laws were incompatible with the European Convention on Human Rights, Sinn Féin deputy leader Michelle O’Neill backed the call for reform.

Ms O’Neill said the criminalisation of women must end through the repeal of Sections 58 & 59 of the Offences Against the Person Act 1861.

The SDLP (with 12 seats) describes itself as “a pro-life party” but does not apply a party whip on the issue.

On May 19th, days before the referendum in the Republic, the SDLP held a special conference on abortion. The party said the “membership reaffirmed our position as a pro-life party. The conference also supported freedom of conscience voting for elected representatives”.

South Belfast MLA Claire Hanna, who supported repeal of the Eighth Amendment, said she was “instinctively a pro-life person” but was “still very conflicted”.

“I would support reforms on FFA, sexual crime and decriminalisation,” she said.

Foyle MLA Mark H Durkan says he was “pro-life”. On whether he would vote for any abortion reform he said: “It would depend what the choices are.”

“We certainly don’t want to see the extension of the 1967 Act similar to that in England,” he said.

South Down MLA Colin McGrath described the referendum result as “stark”, with a clear message for repeal.

“As a democrat I respect that vote though I remain a pro-life supporter,” he said.

“We must be a compassionate society - one that looks out for women and helps them in their hour of need. I’m not sure that abortion on demands best meets that need.”

The UUP (which holds 10 seats) does not apply a party whip on the issue either.

“I am reassured that our party stance on abortion, as being a matter of conscience, is the right one.”

Strangford MLA and former UUP leader Mike Nesbitt said he did not like to look at the issue “as a binary”.

“I would vote for law reform so abortion was available in cases of sexual crimes and fatal foetal abnormality,” he said.

“I would no more insist a woman go full term than I would force them to abort. It has to be their decision.”

East Antrim MLA Roy Beggs said he was “somewhere in the middle”.

“I am not in favour of abortion on demand. Having spoken to a number of women who had suffered fatal foetal abnormality I recognise their plight.”

Leader and East Belfast MLA Naomi Long said there are circumstances, including FFA, rape and incest, “in which termination may be the least worst option”.

She said it was “not sustainable, safe or fair” for women to have to travel for abortion or take pills procured online, risking prosecution that may deter them from seeking medical help in related emergencies.

“As a deeply personal matter, I feel this should ultimately be for the woman to decide,” she said.

“I therefore, support decriminalisation, with access to free, safe, legal termination within strict gestational limits. I do not support the extension of the 1967 Act to NI.”

“Full decriminalisation is not the answer as there are issues re coercive control which mean it may well be appropriate to prosecute someone who has forced a woman to have an abortion,” he said

Green Party North Down and South Belfast MLAs Steven Agnew and Clare Bailey are both pro choice and want to see abortion “decriminalised without delay”.

“It is a health matter not a criminal issue,” Ms Bailey said.

“Abortion reform needs to happen now,” he said. “The Tories are sitting on their hands, worried about the DUP.”

TUV leader Jim Allister is anti-abortion and does not support any change in the law.

“I think our law is adequate and compassionate,” he said.

“It provides where there is serious risk to the health or life of the mother.”

Former justice minister and independent unionist MLA Claire Sugden said she did not “label” her position as she was “conflicted on the issue”.

“Ultimately, I believe women should have bodily autonomy,” she said.