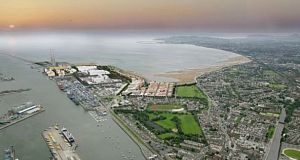 The former glass bottle site on the Poolbeg peninsula. Developers are obliged to set aside 350 apartments for social housing.

The first application for the long awaited redevelopment of the former Irish Glass Bottle site in Ringsend, which has been designated up to 3,500 homes, has been lodged with Dublin City Council.

An Bord Pleanála in April approved plans for a new urban quarter, or “strategic development zone” (SDZ) on the Poolbeg Peninsula in the city’s east end which will provide homes for up to 8,000 people using a fast-track planning process.

The homes, all of which will be apartments, will be built on the 15-hectare combined site of the former Glass Bottle Company and Fabrizia lands, which is under the control of Nama appointed receivers.

In May, Nama said it would shortly be seeking partnerships with developers to build the apartments.

At least 900 apartments will be social and affordable homes. Developers are obliged to set aside 350 apartments for social housing. Dublin City Council said it is at an advanced stage of negotiations with Nama to buy plots on the site to accommodate the approximately 600 remaining homes.

Under the fast-track planning system projects approved by the council cannot be appealed to An Bord Pleanála, which means developers could start work two months after making an application.

The application submitted to the council for the glass bottle site will mean the development of streets, parks, and utilities infrastructure, including the district heating system which will provide the apartments with heat sourced from the neighbouring Poolbeg incinerator.

The work will include the construction of a central boulevard as well as local and side streets, and a neighbourhood square. Parks and amenity spaces will include a coastal park from the boundary of the site with Sean Moore Park to northeast of the central boulevard, that will connect with the existing route leading to Irishtown Nature Park and Poolbeg Lighthouse. A “dog park” and a village green will also be developed.

Cycling and pedestrian facilities, and on-street car parking and cycle parking facilities will also be installed, as well as temporary landscaping of a school site.

When will a decision be made?

Dublin city planner John O’Hara said the infrastructure plans would pave the way for applications for the first apartment schemes to be made in the coming months.

“The fact this application has been made so quickly is a great endorsement of the board’s decision last April to approve the SDZ. It shows faith in the development going ahead and it sets us up for applications for the five city blocks and the first 1,200 homes.”

Mr O’Hara said he expected to be in a position to issue a decision on the application “within the next couple of months” and would be confident of seeing applications for apartment blocks shortly after.

The development of affordable housing on the glass bottle site, as well as other affordable schemes planned around the city, would help ease the pressure in the docklands, said Mr O’Hara, where spiralling rents were pushing out low- and middle-income workers.

The glass bottle site was bought in 2006 for €412 million in 2006 by a consortium involving developer Bernard McNamara and State body the Dublin Docklands Development Authority. Nama bought the debt associated with the site from the now defunct Anglo Irish Bank after the property crash.