Pact between State and religious ‘should widen school choice’

Any new relationship would mean divestment of some religious schools, says Taoiseach 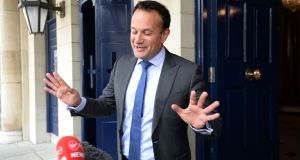 Taoiseach Leo Varadkar: ‘A choice of schools may not be possible or practicable in all areas.’ Photograph: Alan Betson/The Irish Times

Parents must get more choice for their children’s education in any new covenant between the State, churches and other ethical bodies, Taoiseach Leo Varadkar has said.

Greater choice for parents “through the availability of more Educate Together schools, community national schools and Gaelscoileanna” is required, he said.

“It also means the divestment of some existing religious schools to the community sector should parents want that. It doesn’t mean the complete secularisation of education,” he said.

He was speaking in Dublin Castle at a meeting between the Government and leaders of Ireland’s churches, other faiths, and various ethical groupings – an engagement mandated by the Lisbon Treaty.

Twenty-eight separate religious and ethical groups participated in the dialogue as did Minister for Business Heather Humphreys, Minister for Housing Eoghan Murphy, Minister for Education Joe McHugh, Minister for Children Katherine Zappone and Minister of State for Equality David Stanton.

Recalling his address to Pope Francis last August, Mr Varadkar suggested that “the time had come to build a new relationship between religion and the State in Ireland – a new covenant for the 21st century. One in which religion is no longer at the centre of our State but continues to have a real and meaningful role to play on our society.This structured dialogue is part of that work.”

Open, transparent and regular dialogue is the best way to do this, recognising that all sides in the debate have much in common, but yet “respects our differences”, he said.

The covenant is not one “handed down by the State”, but is instead “created by the people, shaped by all of you and reflecting the values of our society”, said the Taoiseach.

“I am very proud of the fact that our country is now one of the most diverse in the world, and one of the youngest,” said Mr Varadkar, who began with an apology over his “sinning priests” attack upon Fianna Fáil leader Micheál Martin.

Irish people see “the value of religion and faith based organisations every day all around us”, he added, citing the work of religious charities and voluntary organisations.

“Any new covenant – any new relationship between the State and your organisations – should be about pluralism, rather than absolute secularism,” he said.

The divestment by the Catholic Church of schools under its control can “give rise to concerns” among parents, but he believed that problems can be handled “sensitively” and “in a collaborative way”.

The objective, he said, is to offer the choices desired by parents, but “such choice does not denigrate in any way the invaluable contribution of various churches” to Irish education over many generations.

“It simply recognises that in the more diverse Ireland of the 21st century many parents want a greater choice about where to, and how to, educate their children,” he said.

“We must also recognise that a choice of schools may not be possible or practicable in all areas, so we need to have regard to the views of majority as well as minorities,” he added.

No curbs should be placed on future State funding of faith-based charities and voluntary organisations, such as the St Francis Hospice and Our Lady’s Hospice and Care Services, however.

“We do not want to see their funding taken away or the voluntarism and ethos that exists there removed,” he said. “Many faith-based organisations have made a huge contribution to helping us deal with the housing shortage, such as Crosscare and de Paul, Peter McVerry Trust and others.”

The Dublin Castle meeting was “a little bit of an experiment”, he said. But he hoped for two-yearly meetings and more regular meeting between the Government and individual groups.